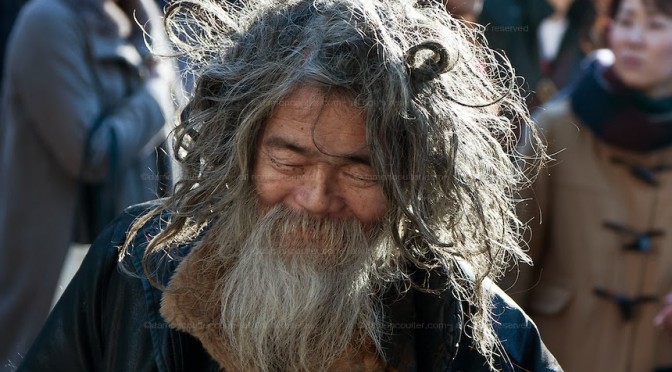 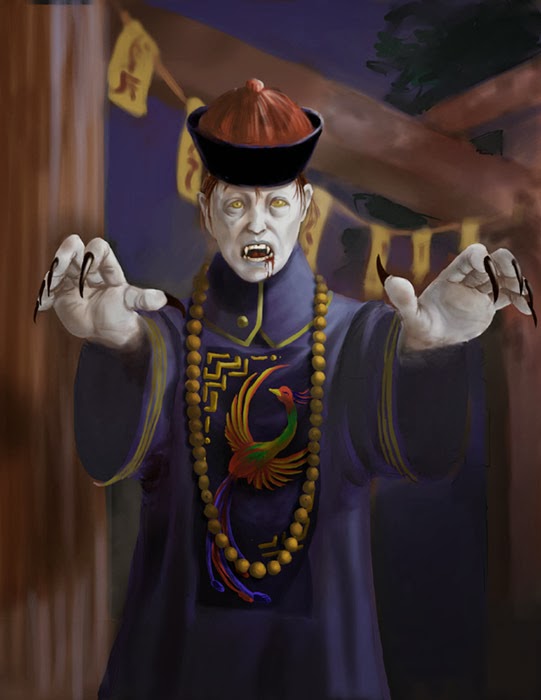 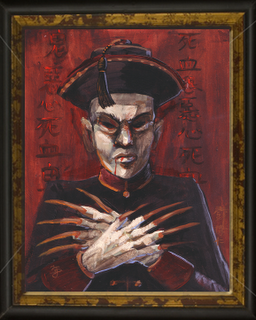 Jiangshi are the reanimated corpses of the dead and their appearance will often reflect how long they’ve been dead. Older Jiangshi may be severely decayed and covered in rotting flesh while younger Jiangshi may be fairly intact. Their hair is typically bleached white and may continue to grow long after their death, becoming long and unkempt. 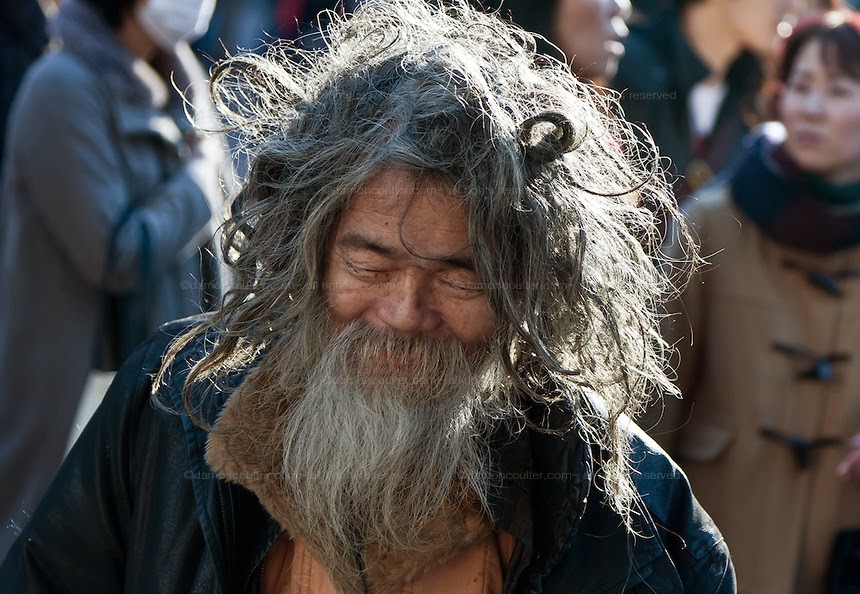 However, all Jiangshi have three trademarks to their look that are almost universal. First, they are known to always be wearing the clothing of the Qing Dynasty era, regardless of whether or not their death was recent or not. Second, they are always said to have a pale, sickly green complexion, often explained by moss, mould or disease. And, finally, third, they are always known to be hopping with their arms outstretched in front of them. 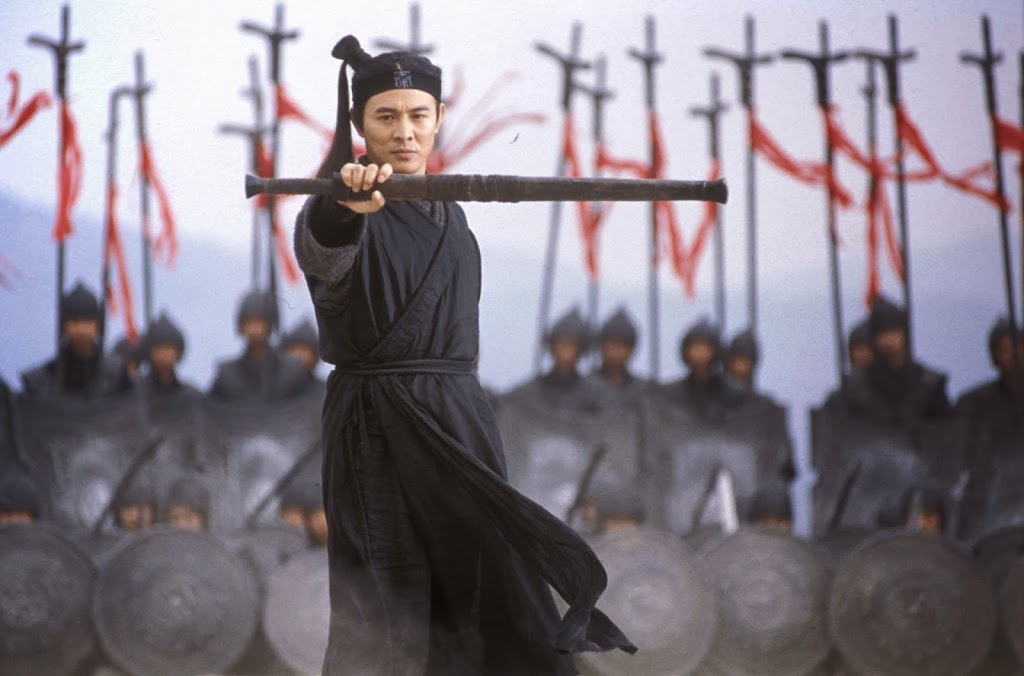 Jiangshi, like Vampires and Zombies, have an incredibly high metabolism, resulting in them appearing gaunt and withered as they have difficulty maintaining body fat. In some cases this can result in them looking old or decayed, however in many cases this, combined with the natural tension in their muscles caused by defects in their nervous system, can make them look incredibly cut instead. 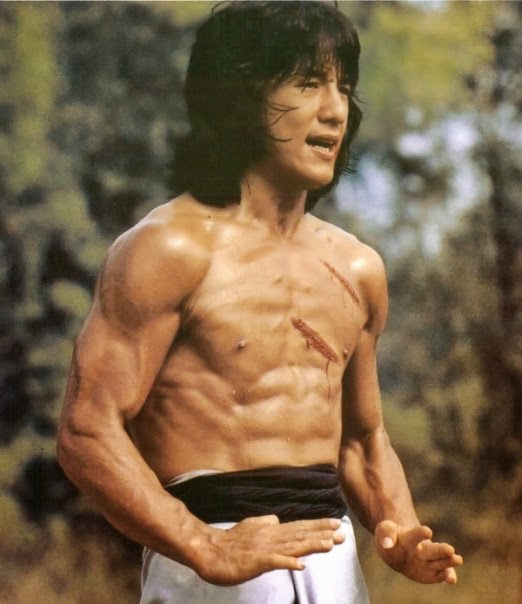 Movement can be difficult for many young Jiangshi, often looking uncoordinated or even clumsy and having an unusual bounce to their step. They may sometimes trip, fall over, tumble or roll with little warning. This is caused by damage to their nervous system which results in their muscles being almost constantly tense. Their movements are stiff and uncoordinated because they are usually incapable of smaller, gentler motions as their muscles overreact to signals they are sent. At times, this may result in looking out of sorts in public, sometimes even intoxicated.

Their attire is usually fairly normal, though sometimes peculiar as they tend to have a style to themselves. Many older Jiangshi, having lived for centuries, may actually travel in the clothing that they wore in their original lives as they’ve become comfortable with them. However, when going into public they still maintain some degree of modern fashion knowledge as to not look terribly out of place. 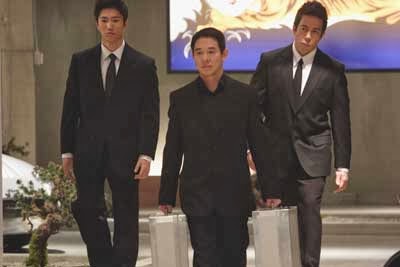 Their complexion tends to be average though sometimes pale. Unlike Vampires, they do not have any severe allergies to sunlight. Instead, they have a degree of light sensitivity which can result in migraines or tension headaches that can be quite debilitating. Unfortunately, a severe headache was one of the symptoms shown by one famous Jiangshi before his untimely death. 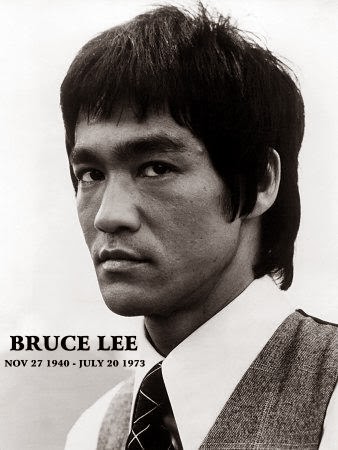 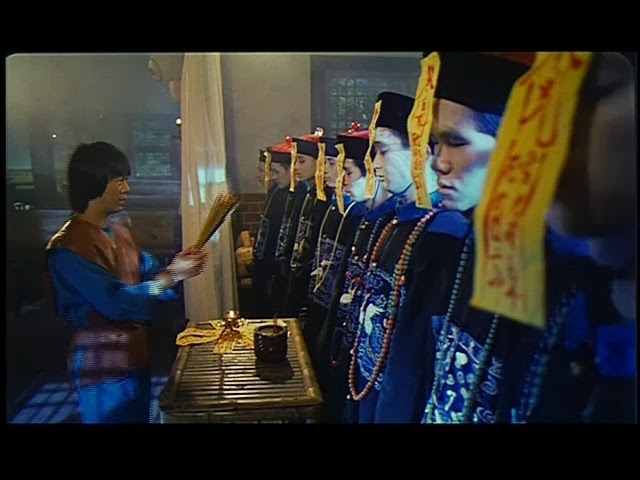 Jiangshi, as a member of the undead, are immortal entities with an extreme endurance and stamina. They can bounce after their prey for some distance, do not tire and are difficult to kill. As they do bounce after people, they will often overwhelm their target and, through biting them, turn their victims into more Jiangshi which will join them on this hopping rampage through the countryside.

On top of their natural physical abilities, the Jiangshi are also a type of Vampire. Though recent depictions have been influenced by the western Vampire image, most Jiangshi in historical accounts have been psychic vampires which drain life force, or chi, from their victim rather than blood. This transfer does not require direct physical contact, though it may result in the victim slowing or collapsing before being overtaken by the Jiangshi and bitten for conversion. 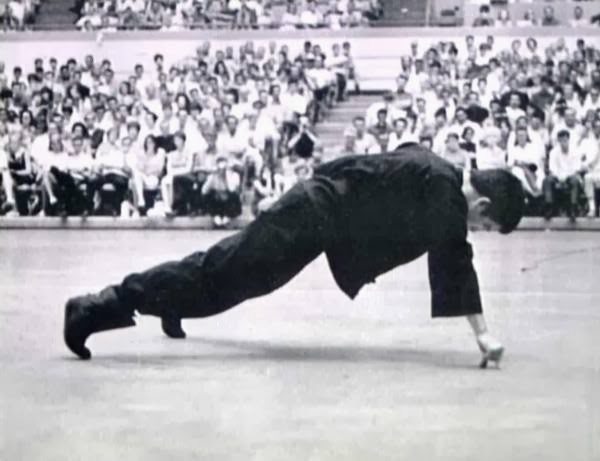 Jiangshi do not actually feed on the life forces of those around them but rather, like many other parapsychic entities, use their victim’s chemistry and pheromones to balance their own. They communicate through subsonic and biochemical signals, resulting in chemical changes in surrounding people. After causing this change, a Jiangshi will then absorb the pheromones produced by others to supplement their own natural neurochemistry. Through this complicated symbiosis, a Jiangshi may become more vital and lively around large groups while making others around them feel sluggish or even weakened in their presence.

However, another attribute which can make people feel slow or weak around the Jiangshi is through careful utilization of one of their defects. The natural tension of muscles in Jiangshi causes them to be like spring-loaded living weapons. With controlled application of their force, a Jiangshi may release the tension in their muscles in extreme bursts to allow seemingly impossible physical feats. Jiangshi have been known to perform great feats of strength and agility, including producing immense amounts of force with minimal movement.

With these traits combined, Jiangshi may appear incredibly impressive and unstoppable. But often the pressure to demonstrate these skills can get Jiangshi into some trouble or into physical situations that they are not entirely prepared for. Luckily, on top of their already impressive abilities, Jiangshi also tend to be incredibly durable and have been known to survive injuries that could otherwise kill someone. 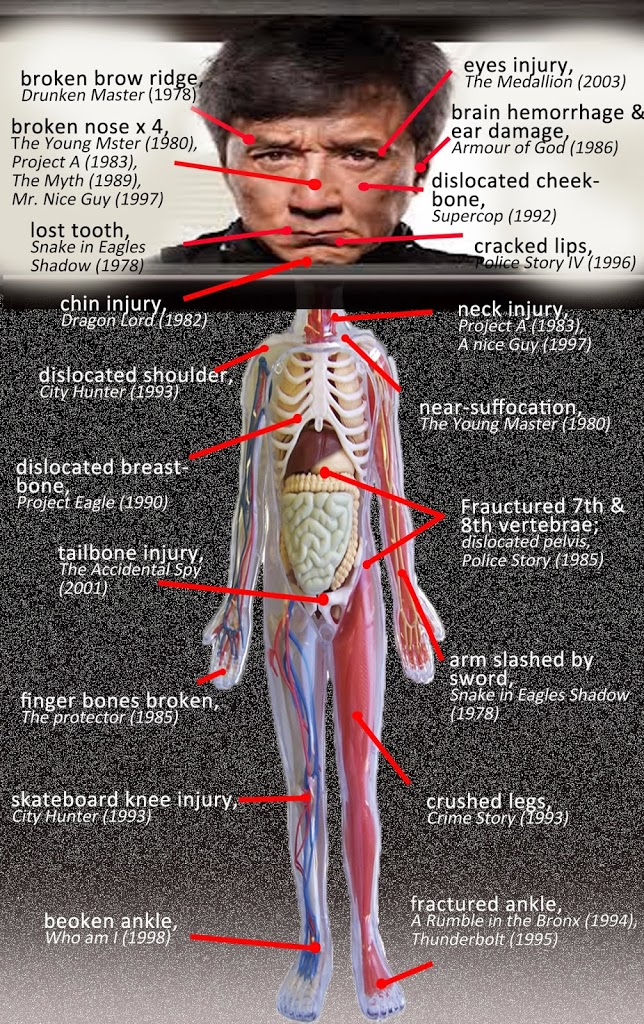 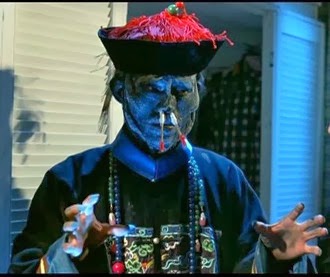 Jiangshi have been described as rabid, wild beasts that will chase down prey. They are much like the Zombies of popular fantasy and seem to be on a mindless, instinctual drive to feed on the living. Hopping after them for some distance, they will feed off the life forces of their victim before biting them and making them a part of the horde.

The only defenses against the Jiangshi are elements often seen in western folklore regarding their cousins. The Jiangshi are naturally afraid of mirrors, detesting their own reflection and being harmed by the spiritual nature of reflective glass. Items made of wood also seem to have some effect on them as well. But above all the biggest defense against the Jiangshi is daylight itself. During the day time, after hearing the call of a rooster, Jiangshi will become reclusive and disappear into shadowy corners to avoid the light. They will often find caves or underground passages in order to hide through the day and await the time when they can surface once again. 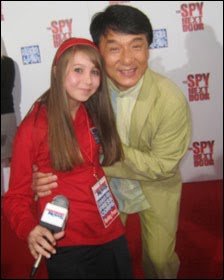 Jiangshi are no more rabid or violent than the average Vampire or Zombie in society. Though they often take part in martial arts to help with their coordination, they rarely seek to actively harm people around them as it would damage their symbiosis. However, when they do become irritated with someone, they can become a force to be reckoned with and have been known to cause tremendous amounts of damage in short periods of time when provoked.

Like Vampires and other Alters of their sort, Jiangshi do actually have some psychological and physiological disorders that make normal human interaction difficult. The first of these traits is their light sensitivity which can be troublesome for some time and will make them wear sunglasses often, even when not completely recommended.

The second common trait is a psychological disliking of their own reflection common in many Alters. Only in the documentation of the Jiangshi was this accurately recorded rather than being translated as “having no reflection” like it is done with western Vampires. It is an effective tactic against younger Jiangshi to present them with mirrors in order to cause them psychological distress. 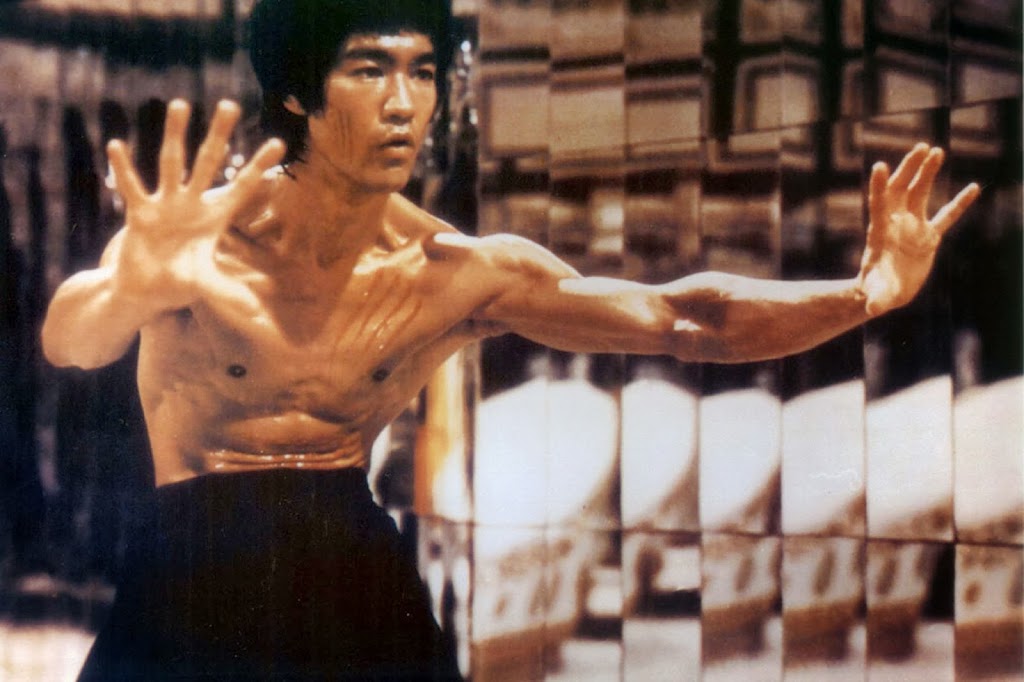 However, Jiangshi often train rigorously to get beyond these defects and find their way into society. These efforts had gone unnoticed for many centuries until the advent of film when the Jiangshi were given a chance to shine and demonstrate their skills to the public. Often, though their Alter traits tend to be trained away or hidden, it becomes easy to identify a Jiangshi by their near superhuman abilities.

(I write books. Read them so I don’t have to send a Jiangshi after you!)