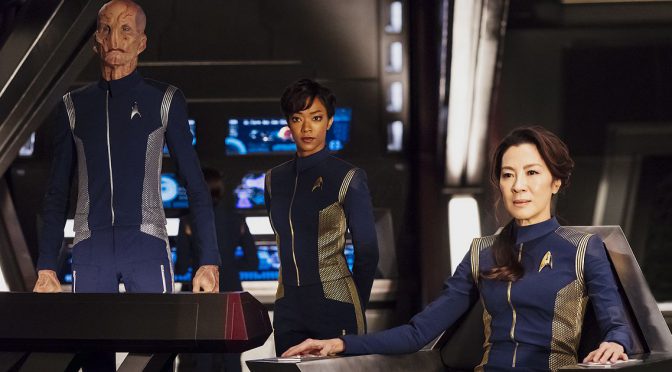 After months of delays, backstage rumors, sudden loss of its show-runner and so many unnerving little announcements coming out of the production of Star Trek: Discovery, the people finally got to see something better than that awful half-rendered ship from the comic con footage. And, though the recent trailer appeared months after the show was supposed to air, we finally have something about the production that looks promising. Showing slick visuals, a somewhat interesting set up, and a ship that didn’t look like ass – it was decent. Though the involvement of the Klingons seems to confirm some theories that people were bandying about nearly a year ago, at least now there was something to discuss.

And of course the jackasses came out of the woodwork.

In an effort to fight back what they call the “white genocide”, a thankfully small but vocal minority (ironic) jumped at the chance to decry the cast of characters. There were too many women, too many minorities, and not nearly enough straight white men for them. Clearly, by their assessment, social justice was out to ruin Star Trek by forcing diversity onto its cast and crew. And the rest of us only had one question to ask:

What Star Trek have these assholes been watching?

Always At The Frontier 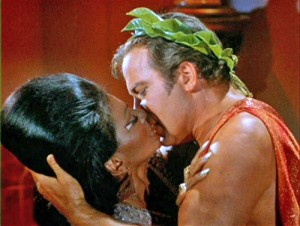 For as much as Star Trek was about the phasers, warp drives, and alien races, it was also about the human race and the ideal version that Gene Roddenberry believed we could be. Though never quite being the Utopia that people have always labeled it as, the Federation was still a reflection of the better natures of humanity for several decades running. The original series’ cast of characters included a variety of backgrounds that were terribly risky when it broadcast. Sulu was a Japanese character at a time when Asian actors had a hard time getting work, portrayed by George Takei – a man who literally spent part of his childhood in an internment camp. Chekov, though white, was a Russian character on TV only five years after the Cuban Missile Crisis. And Uhura, a black woman on television at the height of the civil rights movement, was famously part of one of the first interracial kisses on television. And, before they were forced to change it, the pilot originally had a woman as first officer. 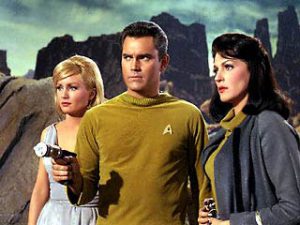 People have always understood this and the executives even feared it. They went out of their way to force “Number One” out of the show and tried their best to stop the kiss between Kirk and Uhura. But Shatner sabotaged their attempts to scrub the kiss while Number One’s actress, Majel Roddenberry, ended up marrying Gene and being part of the franchise for the next 4 decades. So, despite their best efforts, the message got out. Martin Luther King Jr. even asked Nichelle Nichols not to leave the show when she was considering it because of how important he felt her role was. And he would one day be proven right when Whoopi Goldberg, Guinan of The Next Generation, cited the original series as the show that convinced her a career like hers could be possible.

To look at the cast of Discovery and see a problem is to not be familiar with the message and direction of Star Trek at all. There have always been people of color in the cast of Star Trek and it’s by far not the first time they’ve taken important roles in the cast. Since the days of Nichelle Nichols acting as the communications officer we’ve seen actors from all backgrounds step into increasingly more important roles. Where were these people when Geordi LaForge was the black, disabled chief engineer? Where were they when Benjamin Sisko was introduced as the black commander and later captain of Deep Space Nine? Where were they when Voyager had only three straight white men on the cast? 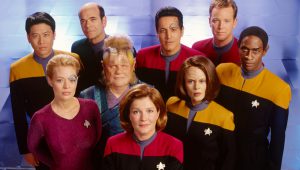 No one took any shots at this cast for being too “diverse”, but look at it closely. There are three white male actors, and of them only Tom Paris (Robert Duncan McNeill) was actually portrayed as being human.  The other two, Robert Picardo and Ethan Phillips, portrayed a holographic doctor and an alien – which I noted in at least one person’s comments apparently doesn’t “count”. They were important characters, but to say they were absolutely the heart of the show would be a gross misrepresentation. In fact, of the three, I’d say that the one with the most actual character growth was The Doctor, a hologram, and he didn’t even get a name.

After those three, any pretense this was a show focused on straight white men goes right out the window. The man with the facial tattoo, Chakotay, was portrayed by Robert Beltran, the son of first generation Mexican-American immigrants. To the right are Tim Russ,  clearly a black man, and Roxann Dawson (née Caballero), who was playing a woman named Torres. To the far left, portraying Harry Kim, we have Garrett Wang, the son of Chinese immigrants – once again a second generation American. And in the front you’ll see Kate Mulgrew as Kathryn Janeway, the first female Captain of Star Trek. Did these people seriously think she would be the last?

It’s ironic, for a culture that often claims others are “fake geeks”, that someone would claim to be a fan of Trek and be offended that the cast was full of people in every size, shape, and color. In fact, I’d go so far as to say that the people who did it either shouldn’t be watching Star Trek in the first place or need to start watching it more closely. Star Trek taught me to look past differences, to understand others for who they are, and to put aside old prejudices. It taught me to respect that everyone has their place in this world and that we didn’t need to scramble to fight over who got to sit in the big chair. It showed me a world where we might have just gotten past all of this bullshit and realized that people are just people. And if you never saw that, you weren’t paying attention.

Before this trailer came out, I had reservations about Discovery for a variety of reasons. I wasn’t too keen on the constant rumors of conflict behind the scenes. I was less than thrilled when it was delayed so often that the trailer came out almost 5 months after it was supposed to air.  You can bet that when the show-runner abandoned ship to focus on producing other series, despite calling this his dream project, it raised some red flags. And I was never that thrilled with the idea of paying for a streaming service just to watch one show. But now that these people have reacted like this, to this trailer…

I almost feel like I have to do it out of spite.

(I write novels and dabble in screenplays. If you see this and feel like I’m promoting “white genocide” – you can fuck off. The rest of you can find me on Twitter.)