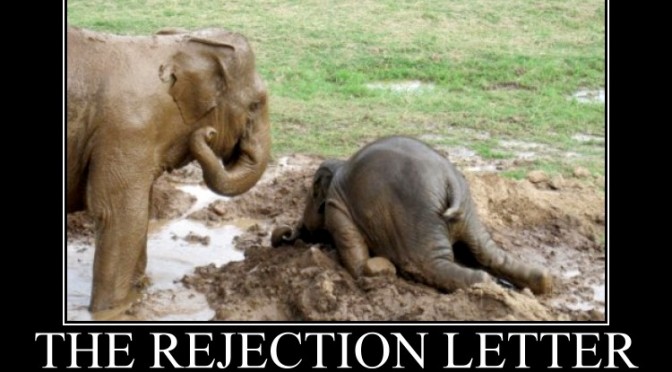 Wow, look at me, I’m back. Though I don’t know if anyone will bother looking at it since I haven’t updated. I’ll be honest, I was pretty right about the kids kicking my ass back and forth across my house while draining what little is left of my sanity and soul. Truth be known, I can’t remember the last time I had a guilt free sequence of uninterrupted sleep, but that’s another story.

Today, I got rejected again. My crane looks like crap.

But it got me thinking. See, before the kids got here I had a sequence of other entries I wanted to make here and I realized that I had to get them in. Not only that, but I had to fight to retake what little of my life there was to take. In essence, I’m not getting any sleep anyway, so I might as well do something with the couple of minutes here and there where I get to take a breather. I can sleep when I’m dead.

The inherent BS that I was reminded of was that of arbitrary numbers. Try as we might, we can’t help but shove them into other people’s faces. Writers are especially guilty of this, even without realizing it. Think about it, how many times have you been given a number about how many pages should be in a book, how many chapters you should consider per pages, or how many words to put into a hook for a query or pitch? They’re everywhere! We tell ourselves that you should expect to be given an advance somewhere between 0 to 15,000 dollars. You should be prepared to spend the first 10 to 20 years in complete obscurity (though I have it on good word it should be 12. Why? Because I said so). And, most importantly, you should expect to be rejected at least 10 to 20 times before you get something published. And if you get past 20 times you should consider what might be wrong with it.

Is there any actual logical basis behind any of these? Hell no. But do we need it? Probably.

In everyone’s mind there’s a little voice that tells them they’re going the wrong direction on something. It could be a path of life, it could be a decision on a sentence. Regardless of what it is there is a voice back there, somewhere, telling us that we suck. When you have that voice, something which doesn’t require a whole lot of help, you find yourself a prime target for the emotional barrage that is rejection. 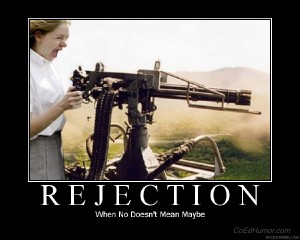 Rejection is a nasty monster and we’re going to be hit with it a lot. So we find ourselves in a position of needing to tell ourselves not only that its natural but that there is a light at the end of the tunnel. This editor didn’t accept your work. But maybe a dozen editors down the line you’ll get lucky. Keep trying!

But of course, this is complete BS. Yes, it’s true that if you were to keep submitting the same work over and over again you could eventually find someone that likes your work. This itself is not in doubt. What I’m calling attention to is the attempt to try to quantify this with a set of numbers. When you first submit a story, the odds of getting a yes or no are equal. You have a 50% shot the first time through, ignoring things such as editor’s taste and so on. So, when you submit to the next editor, what are your odds then? They’re still 50%.

At no point does the fact that you’ve submitted this thing multiple times change your odds. Every editor is a clean slate and a new try. It wont get any easier. You can’t get a crappy story published no matter how many times you try. You can, however, learn after 30 failed attempts that you may be backing the wrong pony in the race.

Am I being a downer because I’m bitter I got rejected? No way. I’m just saying that it’s irrational to put a number to how many rejections is a reasonable number that you should expect. You could be published on the first editor, you could be published on the 20th, there’s nothing about how many times you submit that will increase or decrease your potential odds per editor. So, keep at it. As Randy Pausch said, walls aren’t there to keep you out, they’re there to keep other people out. 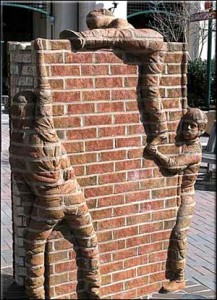 So what do we take away from it? Stop waiting for that magical number to pop up and just go for it. You’ll get accepted when you find someone that really wants it. They have to be out there somewhere. And if you’ve run through an extensive list of people without any success, move on knowing that you at least tried. You can’t avoid rejection, you can only learn to move through it and redirect the energy to a better direction. 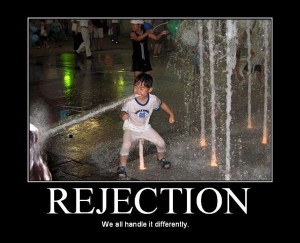 Tonight, I’ve taken the punch to the face and got off my ass to write this blog despite operating on only a sparse number of hours of sleep (I think the naps combined are somewhere around 4 hours). Tomorrow, I’m going to try to get to work on things that I’ve felt I couldn’t get together the time to work on. After that? Who knows, I might just succeed. All I know is that people are a lot like Sharks. You can either keep swimming and live or stop and suffocate. As frustrating as it might be, we all have to keep swimming. Take baby steps if you have to and build up the courage to submit that first time.

And remember, when you do get that rejection, don’t give up…