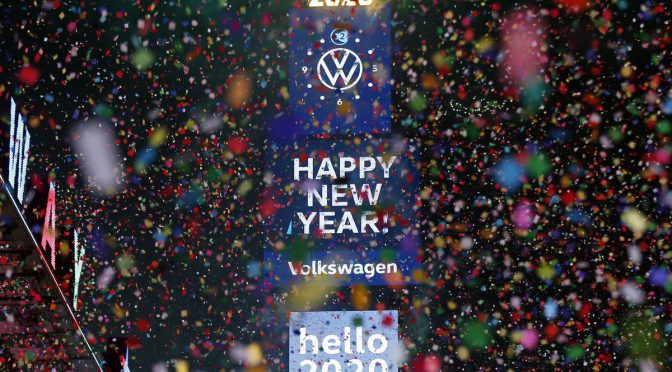 It’s 2020: a new year, a new decade, and for many people a new opportunity to measure their expectations. It’s a time of reflection and a time of trying to come up with goals that you hope to obtain in a year’s time, even if resolutions don’t always work out for the best. But still, we keep trying, because for this one window of time we feel like there’s hope that things will be better the next time that ball drops. Maybe we aren’t coming out of one of our “worst” years, maybe we’re even coming out of one of our best – but even then we still want to try to make sure this next one’s better. And, for at least the first couple of months, most of us think we can.

Resolutions are a bit of a funny thing. We always want to make big, sweeping changes in our lives, but study after study shows we’re less likely to make those changes than we are to make smaller, more reasonable changes over time. We make general, feel good declarations, yet those same studies say that specifics are more likely to succeed. So, ideally, we want to make specific goals with defined milestones that can be achieved in steps.

Of course this means that my resolution for the year is to make sure every day counts and that I take advantage of more opportunities – because I’m terrible at taking advice.

I’ve never been one for celebrating the new year. I think it’s because my family never really celebrates much of anything. It’s not that we’re boring people, but I was always taught that each day had about the same value as the one before it – not always in words, but in action. My family’s never had opportunity to take time off, unwind, or make big plans. We do what we can, we still give gifts, but we don’t really hype anything up. In fact, of all the holidays in the year, I think the only one we really have any traditions for is Halloween because we really like to carve pumpkins and we could share that with others at our own doorstep.

Growing up, I sometimes felt like this meant that no day really had any value. If every day is just as important as the last or the next, then what makes any of them special? The problem with this sort of mindset, especially if you’re a writer, is that devaluing your time is generally the worst possible thing you can do. If you question the value of your time, you can question the value of what you do with it. And, seeing as we’re often defined by what we do, losing sight of its value is dangerous in the end. Fortunately, over the years I’ve matured and seen the real value of people, time, and what we do with it all.

Unfortunately, the most recent event to remind me of that value was that a member of my family passed away suddenly and well before his time.

When I was a toddler my dad was in the Navy and could spend several months out to sea. I don’t much remember those years very clearly and he was out of the service by the time I was 4, but it means that the earliest memories I have of a male figure in my life aren’t entirely of him. Instead, a lot of those earliest memories are of my uncle, Bob, who was quite possibly my best friend in the whole world for the first few years of my life. A man who was often rough around the edges, Bob was rarely a pinnacle of maturity but was one of the most caring people I’d ever known. He was a short guy, often hairy, with a distinctive, rough, yet often friendly voice that could be easily picked out of a crowd. He was blunt, quick to the point, and ready to trade insults with anyone who would point out some of his faults. Yet, despite his punchy nature, I can quite easily say he probably saved my life without ever knowing it as he helped my family through some of our toughest times.

Truth be told, though I started my career in writing with realistic expectations, I’ve always dreamed that I could do something spectacular for a select few people someday. Bob was always on that list. I know that very few people reach the point where they can do that, but we all have those daydreams of reaching that mountain top. We’ve all had that moment where we would wonder who we’d thank as we accept an award. We’ve all thought about what we would do if we were the next big hit. If you haven’t yet, you will someday – it’s human nature to hope for the best results even if they seem impossible.

The thing is, while I’ve done better to value time, I’ve often talked myself out of seizing opportunities to do things because I always thought there would be another chance down the line. Creatively, this means some projects that I’ve wanted to do for years have been left on the backburner because it didn’t feel like the right time. Professionally, this has meant that I’ve let some opportunities pass when I shouldn’t have, even if it felt like the right decision in the moment. Personally, it meant I didn’t get one last chance to see the man my dad admitted “was like your other dad for the first couple years of your life”.

I can’t help but wonder today what life could have been like if I’d seized every opportunity that came around. I don’t mean to say I should blindly jump at every thing that presents itself like Jim Carrey in Yes Man, but I do wonder if I couldn’t use a little more of that energy in my life. How many risky projects have I shelved because I didn’t think they would go anywhere? How many stories have I failed to tell because I didn’t think anyone would want to hear them? How far could I have gone if I’d put present day concerns behind me in favor of looking towards promising futures?

Would I have had a chance to show him how much his kindness meant to me?

Obviously, no one can change their past and some chances are gone forever. But I sit here thinking about how I could make sure it doesn’t happen again in the future. I know everyone has this sort of revelation when someone passes, it’s already happened to me once before when I was inspired to write my first book. But Bob passed at a time when I was already struggling with the fact that I’d missed some chances along the way. He always had weird timing – usually early since he drove like a madman.

Don’t worry, that’s not how he died.

So now I look at the opportunities I have ahead of me and what great things I can do with them. I have a third book I’ve been working on that I kept backing away from for what now seem like trivial reasons. I have ideas that have never seen the light of day and possible avenues I could never bring myself to go down. I have a project with a friend that could go far if I just trust it to work out. I may have missed my chances to do these things in the past, but I don’t have to keep missing chances in the future.

So this year, 2020, I resolve to make sure that moments and opportunities don’t pass me by – to make sure every day is equally valuable. I can’t be sure I’ll take advantage of every single thing, but I can certainly do better than I did the year before. And, thankfully, since I am a writer I can still do something to show how much Bob meant to me. This blog post is a start, but I think I can do better than this. Though I’m not sure how yet, I know that I am a world builder and, given time…

(I write books and dabble in screenplays. Follow me on twitter to see how well I do with all of that.)

One thought on “My Resolution”