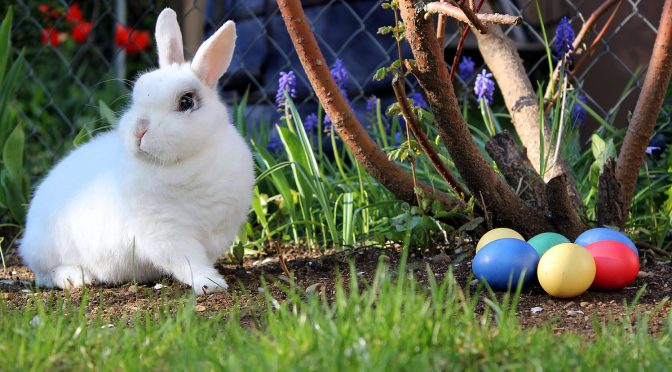 Easter’s coming and I have something to get off my chest. Something’s bugging me and it’s time to set the record straight. Time and time again I’ve heard the same joke: “What does a rabbit have to do with Easter?”

You see, the problem with Easter’s traditions is that they’re not really from a Christian holiday so much as a Christian holiday overlapped them (like Halloween). In fact, when you look up the origins of Easter you start to realize just how much the holiday has stayed exactly the same but was given a different story.

Originally, the season around the holiday we know as Easter was associated of the goddess Eostre, which, according to some sources, is even pronounced “Easter”. Eostre was the goddess of the dawn, spring, reproduction and pretty much anything that says “new life and fun times.” Considering she was a Norse Goddess, she was one of their best friends since they had winters that could make you go crazy. Really, just look at the Norse and you know they hated the cold: Hell was frozen over, the end times would be foretold by a three year long winter with no end and their favorite god, Thor, was in charge of making crops fertile through rain storms. Winter was not their friend. In fact, if the stories of the spring celebration are true, they believed the spring was the world resurrecting from the dead. (ZOMBIE EARTH!)

So when spring came, they thanked the goddess for it through a festival. And during this festival they would decorate eggs the colors of the dawn (sound familiar?) because those were a symbol. Now, there’s some wonder if the festival of Eostre was actually a fabrication to make it seem like the Christians ripped the idea for the holiday from the pagans. But given Halloween, Christmas and all these other holidays that “conveniently” line up with pagan holidays… it’s not hard to notice a pattern. Especially since Eostre’s name is the possible namesake of the holiday.

So, you’re wondering by now: just what does this have to do with the bunny? Well, that’s simple really. Eostre was represented by many objects and elements. The sunrise, the spring, the spring hare. And for the celebration of Eostre, after coloring these eggs the colors of the dawn, they’d celebrate in about the same way we do today. And since the spring hare was a representative of Eostre, it was tied directly into the celebrations.

So when you find a person who doesn’t understand the bunny. Just remember, there’s a pretty good reason why the bunny and Jesus have nothing to do with each other. And what about the Easter Bunny? What’s he think about all this?

He’s a little sick of our shit.

And on this Easter, if you want to avoid being pounded by a bunny, go ahead and read my books. They’re slightly less dangerous.