A couple entries ago I spoke of how Hunger Games was, in fact, a bit derivative. But, as I stated then, that’s a good thing. Holding onto conventions and rooting your works in the timeless aspects of the human experience is not only a benefit to your works but a necessity. And, because of this continual line that you can trace through works throughout time, you can follow this and see that old genres never really go away but rather evolve into something new. And evolution, regardless of context, can often be a strange force that can be hard for people to understand.

This evolution is usually a result of adapting to the minute changes in society over time. For instance, if you were to look at early science fiction, when the scientific method had settled into a specific form and started to reject the spiritual aspects in precursors such as alchemy, you’d find those stories were really just contemporary takes on old fantasy stories long ago. Frankenstein is a beautiful example of a story that has been told or retold since the dawn of time – people using powerful forces to raise the dead.

In fact, Frankenstein is one of the best examples of the old cliche of “playing god” since, if you pay attention, all of the things that happened there in were touched on at least once in the bible. The key difference was that, for the first time, the powerful force in question was not a deity or magic but rather a natural force of nature. Science and magic were interchangeable for that story and the same can be said for many of the stories to follow. As the old saying goes: any suitably advanced technology will appear no different from magic.

But sometimes people don’t recognize this evolution and instead consider their genre an isolated, closed system with no external forces applicable to it. During times of crisis they’ll react by trying to put constraints on the genre so they can “play it safe”. I think I’ve made it pretty clear in the past what I think of that concept, but I can understand why people may not see the evolution and how the additive changes wont destroy their genre, only alter it. One of the best (and easiest) examples of this is the comic book industry.

While the book industry is in some notable troubles and are struggling to find their footing in the digital age – the comic book industry is in something that people on the inside consider to be a death spiral. It’s been on their lips for some time and spoken of in conventions as recently as this month when a panel declared they believed the superhero genre was dying.

Now, I could go on for some length about how the problems apparent in the industry have nothing to do with their genre, but that’s another post all together. For now, let’s focus on what’s applicable here: genres don’t die – they evolve. Right now sales are bad, but it’s not because of the genre, it’s for a lot of other reasons and, to make it clear how much it’s not about genre: Superheroes were never a “genre” in the first place, they’re a (for a lack of a better word, no pun intended) super-genre.

In the 1930s there was a thriving comic book and comic strip industry with a variety of stories being published covering just about every genre you could imagine. During this time, a comic came out featuring the adventures of a man raised in the jungle using his wits, cunning and connection with the jungle to fight the forces of evil such as black magic, pirates and wild beasts. With the help of his animal friends and friendly natives he acts as the protector of the jungle. Was it Tarzan? No, it was The Phantom. 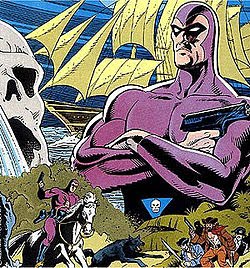 The Phantom was inspired by a combination of myths, legends and characters the likes of Tarzan and Zorro. Had he not been wearing purple long johns he probably would have just been regarded as a knockoff, really. But with the help of the costume he broke out as his own character and became something more than the sum of his parts. And this wouldn’t be the last time Edgar Rice Burroughs left a mark on the fledgeling industry, John Carter of Mars left a giant footprint on it that still hasn’t gone away.

The Barsoom series followed John Carter, a man transported to a world distant from his birthplace and living among people who appear similar to him but live in a drastically different environment. Thanks to being on an alien world drastically different to his birthplace, John Carter is given superhuman powers such as immense strength and agility. Using these powers, he defends the natives of this new world from hostile forces. Sound familiar? It should. 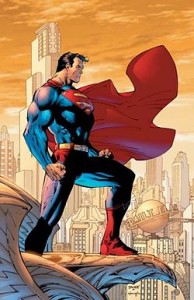 A lot of what’s considered “Superhero” comics just originated from other genres and started to slowly fall into the giant blender until you couldn’t tell the difference between them anymore. Hell, there’s a reason why Batman is called the world’s greatest detective. 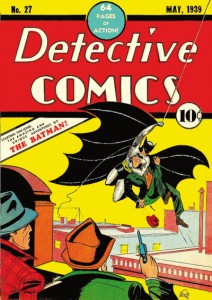 So which of these “genres” is on the way out? It is true that a specific formula for these stories is probably in need of revamping and movement. The stories need to expand, they need to find new avenues and they need to move into plots that haven’t been touched on before. The genre needs to move beyond simply violence for the sake of violence and tell stories once again. Recently, the writer of Static Shock for a period of time said that, during his time on the title, his writing duties were mostly taken from him by the editor and the artist who agreed that there needed to be “action on every page”. That title has now been cancelled and has become another statistic to be added to the pile of failed projects in that industry.

The market has a tendency for natural selection, if you adapt to your environment you thrive, if you don’t, you die. For instance, women have been a driving factor in a lot of the major successes of the book industry in the past decade and are a growing demographic in the comic book and graphic novel market. Knowing this, look at the picture below and see if you can understand what might be wrong with the “genre” at the moment. 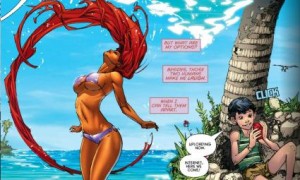 And how is this related to writing in general? If something like superheroes can have its origins in sci-fi and fantasy works of the early 20th century, slowly altered over 80 years, and become something that is different enough that the people who work on it consider it a genre of its own, picture the evolution that happens when you make small changes over time to the genre you’re working on. Picture the growth that can be accomplished by taking new risks with old genres and ideas. It could be as easy as changing one or two details, like putting Tarzan in a purple Speedo. Hell, even Frankenstein benefited from some additions.

And what have I contributed to the evolution of the art form? My books! Buy please🙂