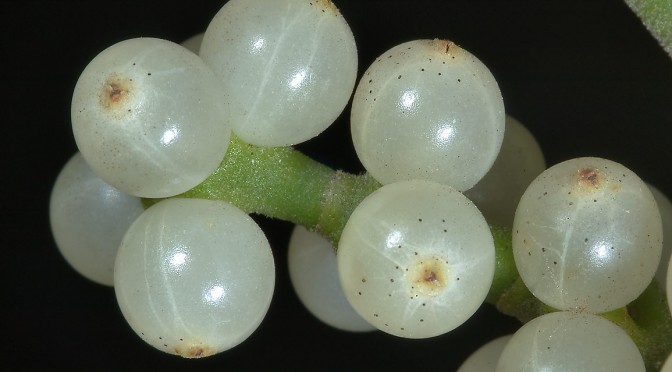 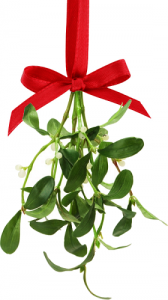 Mistletoe has long been one of the mysteries of the holidays that everyone just kind of accepted. A semi-parasitic shrub that grows in trees, most of us really only know of it for the fact that a twig of it is often hung around Christmas for mysterious reasons. Besides that, we generally don’t know a whole lot about it unless we’re survivalists or botanists. In fact, most of us didn’t even know it was poisonous until that one line from Batman Returns.

But to the Norse, its nature as something potentially deadly has long been known because of a story that some of us may already be familiar with. Because, while unassuming in most regards, in Norse mythology Mistletoe is indirectly responsible for the very end of the world. This would seem like a big task for a simple plant, but the reason is that Mistletoe was too young to take a vow long ago.

It all began with the god named Baldur. Known to be loved by all and good at anything and everything he did, Baldur was a favored son of Odin and Frigg. He was a beautiful man, so fair skinned and perfect in every way that light shined from him and things which were pure and glistening were compared to Baldur instead of the other way around. One would think this would go to his head, but Baldur was even known to be fair spoken, even tempered, and gentle to all around him. 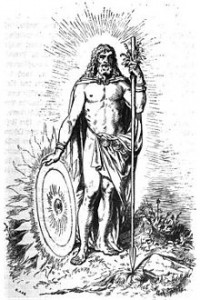 So when it came time that Baldur had a vision of his own death through a dream, his mother was determined to do something about it. To ensure his safety, she went to every thing in the cosmos and asked them to swear a vow to never bring harm to Baldur. This included everything, even inanimate objects, which made the nearly perfect man virtually indestructable. The Aesir, being Aesir, decided the best way to test this and have some fun at the same time was to throw things at him. In fact, it became something of a passtime to play the game of trying everything on Baldur. Rendered invincible by the vow his mother had made all of creation take, all things thrown at him bounced off harmlessly from the greatest stones to blades.

But not everyone was so keen about Baldur. Loki, jealous and the Norse equivalent of a modern day internet troll, wanted to bring Baldur down a peg and cause him some harm. More than that, he wanted to make someone else do it so they could take the blame. But the question was how he could bring harm to someone that all of creation had sworn to never injure. It was then that Mistletoe came into the picture.

Under Norse law, the young could not swear oaths and thus were seen as something of a liability in any situation where an oath was required. They were under no obligation to keep a promise they made as a child and that meant they were often left out of these situations entirely. So it happened that Mistletoe, new to creation at the time Frigg was having everything swear the oath, was left out. It was not so much that she saw it as harmless, though she certainly would have reason to think so, but rather knew that the young plant couldn’t be expected to swear an oath anyway. It had been left out of the loop, and because of this Loki saw an opportunity to do some mischief. 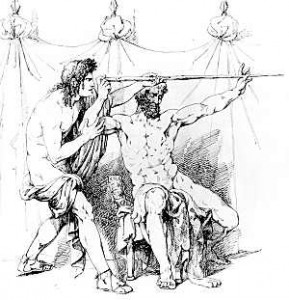 Carving the mistletoe into a sharp stick (spear, arrow, all the same), Loki crafted a weapon from the Mistletoe and handed it to Baldur’s blind brother, Hodur, so he could take part in the Aesir’s game. Hodur, not realizing what sort of arrow he was using, was more than willing to send it flying at his brother who he assumed would be unharmed. Loki, for his part, is sometimes even said to be the one who aimed the thing so Hodur couldn’t miss. But, to everyone’s surprise, Baldur was struck and the wound turned out to be fatal. 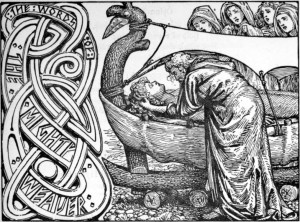 Whether or not Loki meant for this to be fatal is up to debate, he was a trickster but often a violent one who went too far. But the punishments that were dealt out didn’t land on him. In fact, while Loki received no real punishment yet, his actions ended up beginning a chain of events which would eventually result in the coming of Ragnarok itself – the twilight of the gods. Still, rather than punishing Loki, who crafted the arrow (and maybe even aimed the bow), it was Hodur who violated the oath to cause Baldur no harm. Only a day later, Hodur was struck down by Vali, his half-brother (who was only a day old at the time).

But Mistletoe, who had never taken the oath, was found to be without guilt. Going to confront it, Frigg cried over the mistletoe, her tears becoming the berries you may find on the plant. Then, having decided that Mistletoe was too young to have taken the oath and that it couldn’t have prevented itself from being fired into her son, she chose not to punish the plant and allowed it to continue to exist in the world. 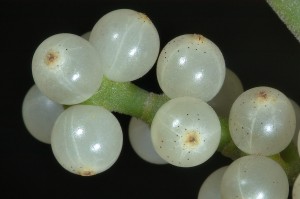 But then, the question becomes: how would this somehow connect to the tradition of kissing under it?

The reason lies in Frigg making the now older Mistletoe take a new vow in some versions of the story. Guilty of having taken part in the death of Baldur, the Mistletoe was given a new task in the world – to become a symbol of peace, friendship, and deep bonds between people as compensation for its role in the murder. Essentially, Mistletoe was tasked with mending what it had broken. The bond between brothers had been shattered by the actions of Loki and Hodur, so it was up to Mistletoe to try to repair it once more.

Because of this, it’s not hard to see how that sort of thing evolved into the tradition we see today. While the specifics are unclear, the fact that many Christmas traditions stemmed from Yuletide traditions of the Norse makes it easy to connect the dots. Mistletoe, tasked with being the symbol of enduring bonds, would eventually become a symbol for lovers as well. And so, in the presence of this symbol, reinforcing those bonds is appropriate…

(I write novels. I know this entry is very late, but if you’d like you can go chew me out on twitter. Happy Holidays! Two more entries to come this week.)