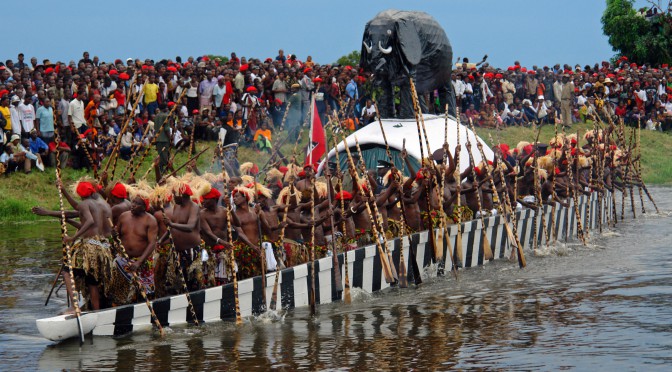 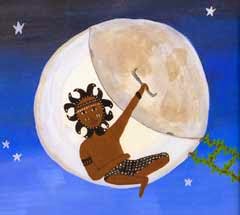 Many of the early details of the story of the creation of the world are shared between the Lozi and the Akan despite the difference in geography. Both believe that Nyame was the creator god, both believe Nyame created the first man, and both identify that first man as Kamunu. But then the variations of the stories get fairly interesting, and when you take all of them together, the colorful story of how the Lozi ended up at the Zambezi begins to be painted.

Nyambe, creator of all things, also created his wife and his daughter, the first women of  the world, but then also felt the need to create the first man. This man, named Kamunu, was created and immediately showed himself to be the smartest of Nyambe’s creation. Pleased with this creation, Nyambe was initially pleased, but soon found that Kamunu may have been a little too smart.

Kamunu, impressed with his creator, began to worship Nyambe zealously and tried to do everything that Nyambe did. When Nyambe created something by carving wood, so would Kamunu, when Nyambe would make bowls and cups, so would Kamunu. Nyambe became increasingly uncomfortable by this as it was the first time one of his creations had the ability to do something he could do. And, despite the fact Nyambe was uncomfortable with it, Kamunu didn’t care – he just wanted to be like his hero.

But despite being upset by this, Nyambe initially didn’t try to stop his fan.  While frightening, these actions were somewhat harmless. But something changed when Nyambe was forging tools out of iron to be used to work his own crops. Kamunu watched this and tried to forge his own tools the way Nyambe had. But as he finished his creation he ended up crafting a spear in the process. Though Nyambe’s tools were all for sowing and harvesting crops, Kamunu had forged the first weapon for hunting. And, believing that to be the purpose, Kamunu used it on an antelope and ate it. As anyone today knows, however, once you’ve eaten one animal, it’s a bit hard to stop – because animals are delicious. 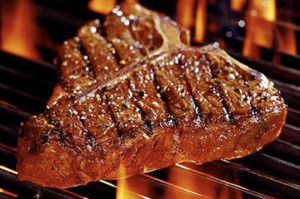 Kamunu went on a killing spree, eating everything he could find that his new pointy stick would take down. Nyambe, initially unaware of this, soon saw the rampant murder happening in his lands and finally put his foot down. Putting down the law, Nyambe protected the rest of his creations by banishing Kamunu from his lands.

But it didn’t last for very long. Despite having been banished, Kamunu eventually came back, undeterred by the fact his hero apparently hated him. One would think that being cast out of your home for apparently traumatizing your god was a clue, but despite being the most intelligent creation Nyambe ever made he wasn’t one to take the hint easily. Coming back with a pot and a spear in tow, Kamunu demanded to be given land to work with and try again at co-existing with the rest of Nyambe’s creation.

Nyambe, optimistic fellow that he was, relented and let the little psychopath stay – the antelope were not amused.

However, not long after returning, Kamunu soon returned to his old ways and killed once again. The other creatures asked Nyambe what they should do and Nyambe said (or had a representative say, depending on which story you believe), “let him eat it”. And so, Kamunu did and when he returned to his home he found that his pot was “dead” (seriously, his pot died, didn’t break, died). Kamunu was upset about this and demanded to know why his pot was gone, only to be told by Nyambe, “my things break too.”

But, undeterred, Kamunu went on to kill again. Demonstrating himself to be something of a serial killer at this point, Nyambe upped the stakes and this time took Kamunu’s dog. Once again, Kamunu was upset by this and demanded for answers, and once again Nyambe said that was the way of the world. However, this time, Kamunu took notice that it was Nyambe himself who broke the pot and killed the dog and that the two of them were now “with” Nyambe. Returning to his home, Kamunu told this to his wife, but she was unconvinced and they carried on with their carnivore ways.

Undeterred by his previous losses, Kamunu went on to kill an elephant as it trampled his fields. Once again, Nyambe said that Kamunu could eat it, and so he did. But as he did, it was not long before Kamunu discovered his son was dead as well. It ws about this time that Nyambe connected the dots for Kamunu and pointed out that, like Kamunu’s son was to him, all animals were Nyambe’s children and that he was never cool with that behavior.

Kamunu learned nothing from this exchange and Nyambe literally decided to pack up and leave himself.

Seriously, this was the moment where African mythology really defines itself because it’s a theme that has existed in so many of their religions. God got sick of humanity’s shit and decided to leave instead of smite everything. If this were a middle eastern mythology we would be finishing this story with “and then Kamunu turned into ash”.

But no, Nyambe was cooler than that and decided that, since there wasn’t enough room for both of them, he was just going to pick up and move. This was actually a pretty reasonable decision since he was the creator of all things and also the world was just starting so the real estate market was looking great. Taking his wife, packing up as much as they could, and traveling as far away as possible, Nyambe figured that putting some distance between himself and the insufferable little shit he created would fix everything.

But Kamunu followed him… repeatedly.

Despite having been exiled, having his life ruined, and eventually being abandoned by his god – Kamunu was a really big fan. The chase went on for some time, stopping off at various locations across the African continent, before eventually they made their way to the home of the Lozi. Here, Nyambe found a river and believed that by crossing it he would be able to lose his intrepid stalker. Crossing the river and leaving Kamunu far behind, Nyambe was ready to have some peace… only to discover Kamunu had figured out how to carve canoes.

Now, at this point, the stories diverge a little, but the general gist is that Nyambe felt that it was a good place to set up an attempt at civilization. In some stories, this meant his daughter would go on to be the first ruler of the area. In others, it was he himself who created the country. But the one we focus on today is the one that really underscores the whole philosophy of this brand of African mythology. Because, you see, Kamunu showed up again and Nyambe did the only thing he could – he left the whole damn planet.

Generations later, the Lozi lay claim to the land as being alternatively either the first people to be there (implying that Kamunu never left) or being the first followers of Nyambe’s daughter after Nyambe had enough. Either way, the story of Nyambe and Kamunu hits a facet of human nature on the head that cannot be denied. For, as much as we would hope we could never go as far, we’re all like Kamunu. Humanity is capable of such wonderful works of creation and expressing great intelligence. But regardless of how incredibly intelligent we may be, and the progress we may make as we continue to advance our knowledge and build new technologies…

Humans with weapons do stupid things.

(I write novels. You can find me on twitter, another miraculous creation of humanity. It’s also kind of a horrible place at times, proving that Kamunu is a little part of all of us.)