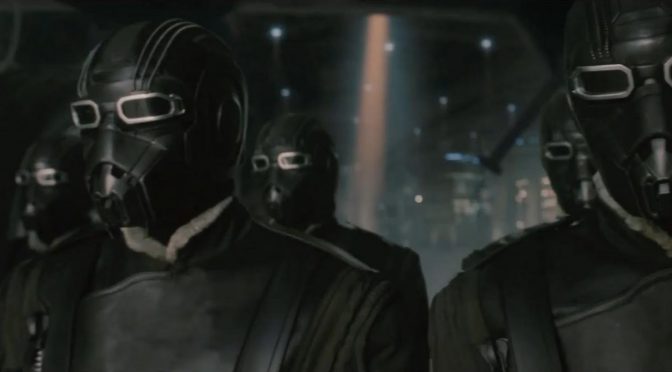 A couple days ago, seeing the internet was losing its mind over the Captain America/Hydra reveal, I sought to clear the air for some people by pointing out the motivations of Marvel weren’t what they thought. After seeing so many people claiming that it was a deliberate choice of Anti-Semitism and/or “Jewish Erasure”,  I felt like pointing out the business reasons for doing such a thing. It seemed like a good way to talk some rational people down from the ledges. Marvel’s not trying to erase Jewish people, they’re run by an Israeli immigrant named Ike and behind the scenes info says he’s not someone you want to cross. And for the most part I’ve heard it did clear some things up for people who only knew about the situation third-hand.

But along the way I made the not so controversial statement that making the world at large think Captain America was a Nazi was a bad idea. While not angry about it (really more apathetic), most people I know have agreed to the same because… well look at the response. However, some disagreed with this sentiment, saying that this was far from being the first time a superhero has switched sides, and that seeing it as a big deal was silly. And you know what? They’re right, making Cap a villain isn’t a bad idea in itself – and that was part of the point of the blog post in the first place. A good “heel turn” can make a property all the better.

However, hearing one of the points raised by those disagreeing with me, I realize it’s time for some clarification…

The Nature of Joining Hydra TODAY 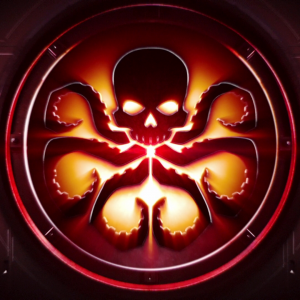 It’s been rightly pointed out that such turns are pretty common place in comic books. In fact, not long ago there was an entire event called AXIS where most of the big names in Marvel were swapped by an “inversion spell”. Good guys became bad, bad guys became good, fun was had by all. Along with things like Superior Spider-man, where Doc Ock hijacked Spidey’s body, this sort of thing is nearly constant. But where I diverge from those who think this wasn’t a bad idea is that this event feels different to me for three key reasons. 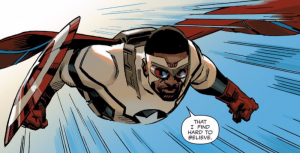 Generally when a turn like this happens in comics it’s a short term change for a couple issues at most. The usual turnover used to be anywhere from one to three issues for a title character. More recently, since writing to the trade became common, it’s been closer to 6. But Nick Spencer has made it clear that Marvel has given him the go ahead to take this as far as he can for as long as he can, specifically saying that this won’t be over in 6 months. Now, of course, the writer isn’t likely to downplay his own work, but it’s clear he’s planning more than a single story arc around this and right now is the best time for him to do it. 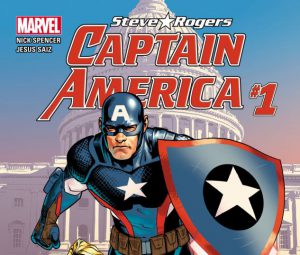 Several people have rightfully pointed out that Sam Wilson is still the official Captain America and that Steve Rogers is just the second string at the moment, not even getting his original shield back. This is true, and it’s also one of the big reasons why this is going to stick around for a while. They don’t really need Steve to be a good guy because they’ve already got a heroic Captain America running around. So even though Marvel will conventionally do anything for some tie-in synergy (the whole reason Steve’s back in the suit in the first place), they’re willing to let a little go since they’ve already got Sam carrying the right shield. And, even if he wasn’t, this has been Marvel’s thing as of late.

Iron Man just finished a run as the “Superior Iron Man”, having been swapped around by the AXIS inversion spell and never being fixed, and that ran for the better part of a year. In fact, the reason Tony isn’t still a raging asshole at this very moment is because Marvel rebooted the whole line and brought everyone back to #1’s again. Had Marvel not been planning a big reboot that reshaped their entire universe, we’d probably still be seeing him trolling San Francisco dressed as Steve Jobs’ wet dreams. 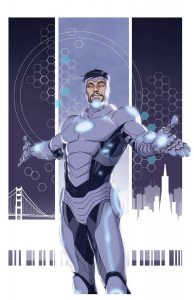 So this isn’t just going to end soon, likely to remain for the foreseeable future, and even after he switches back it may still leave a mark because…

2. This came with a retcon 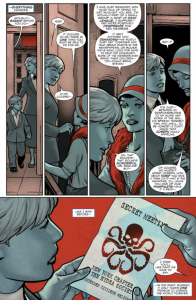 This wasn’t just a twist without an explanation. Though there’s still room to see if it’s all just a big fake out, it came with new material about Steve’s own backstory that makes his connections to Hydra even predate his time as Captain America. Showing scenes from the past, it’s now shown that Steve’s mother was recruited into the organization before WW2 and that is apparently how Steve got caught up in it. Now, there’s a chance this didn’t extend to full membership, but for now they’re using it to imply that’s how this got started. If that’s the case, the implications are that Steve has either always been a member of Hydra or that he had been mentally programmed as a sleeper agent long before he’d even joined the military.

If either of these are true and not further retconned out by future developments or later writers, this is a massive change to who Steve was from the start. And, while retcons are fairly common, you have to admit that this is the sort of retcon that recolors all of the character’s history retroactively. Did he volunteer to the army and the super soldier program on his own or was that something Hydra wanted him to do? Did he clash with the US government over their decisions out of patriotism or because he was working for the other side? Did he rebel against the registration act because he feared about the government overreach or because Hydra didn’t want him found out? It’s a major change and the kind of mark a writer would want to leave on a long standing character like this.

3. This is the first time the words “Hydra” and “Nazi” have been interchangeable 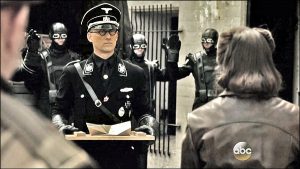 One of the key reasons why I think this is a bad idea is that, while Cap has been on the wrong side a couple times, he’s never been a “Nazi” before. The response to this by those that disagree was that being a member of Hydra isn’t the same as being a Nazi. And, you know what? That would be entirely accurate 10 years ago, even 6, but not so much today.

Don’t get me wrong, Hydra and the Nazi Party have been completely separate entities for the majority of Cap’s history. Though there have been overlaps of membership and always some tangential ties (particularly through their leadership), they’ve had clear distinctions for 70 or the last 75 years. The Nazis were the people Cap was fighting back in the golden age, when he punched Hitler it wasn’t just for show – it was his mission statement (and kind of fun). But as Marvel returned to superhero comics in the silver age, they needed fresh enemies. 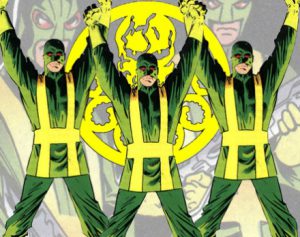 The Nazis weren’t around anymore, so most heroes got new evil organizations to deal with. Along with Hydra other organizations like Advanced Idea Mechanics, The Hand and the Serpent Society all sprung up in the Silver Age as a way to fill in the blanks. And, while It was possible for Cap to face communists at the time, and he did, many of the most memorable communist related stories were centered on Iron Man – who embodied the capitalist ideal of a smart man with so much money he can fix just about anything (except himself). 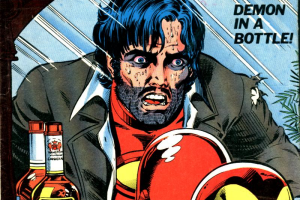 And this version of Hydra, the one to exist for 40+ years, had only ancillary ties to the Nazi party through its leadership. It was there to fill in for it but had more in common with the likes of Kamen Rider’s Shocker or GI Joe’s Cobra – faceless grunts led by over the top supervillains with a convoluted backstory of how they got there. They weren’t Nazis exactly, but they were a fascist organization bent on world domination funded by resources left behind by the Nazis and led by former members of the party. Still, for what it was worth, they weren’t Nazis.

In the comics they haven’t gone and erased that line yet, it’s still there for people who have been reading for a long period of time. But this event came with a media blitz and that isn’t something Marvel does to speak to long time comic readers. Press releases and media campaigns are directed at people with an only passing interest in the property, casual fans with minimal exposure. Right now, those people get the majority of their lore and backstory from the Marvel Cinematic Universe. And, within the MCU, Marvel’s spent the last 5 years making sure that people see “Hydra” and “Nazi” as interchangeable.

This isn’t hyperbole on my part, either. The origins of modern Hydra  have been tied to the Nazi party in the movies now. Their activities today are still being influenced by old Nazi leaders and scientists. And characters within the MCU see very little difference between the two. In fact, in Agents of SHIELD, which has spent a great deal of time dealing with Hydra, they went out of their way to hold this conversation.

Skye: “God, you might actually believe that. You…that is… that is the twisted logic that they teach you when you sign up to be a Nazi.”

Skye: “Yes, you are. That is exactly what you are. It’s in the S.H.I.E.L.D. handbook, chapter one. The Red Skull—founder of HYDRA—was a big fat freakin’ Nazi.“

Sure, Ward disagrees with the label, but he’s also the villain and represented as a compulsive liar who always subverts the truth. So when you direct a press release to that audience, you aren’t telling them that he just joined an organization from the 60s with a convoluted backstory going back to ancient times, you’re telling them he joined the Nazis. And, as much as many of us would want to look at Hydra as a 60s precursor to silly shit like this…

Yes, Marvel just implied Cap is a Nazi, and that’s a bad idea.

(I write novels and scripts, so far none of it is newsworthy. But when they are, you can hate me on twitter – like those crazy people against Nick Spencer)