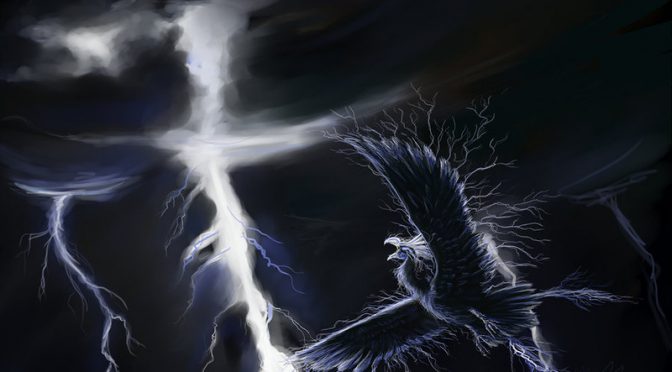 According to legend, the people who came to South Africa did so in pursuit of a fleeing god. Annoying the deity with their mimicry, destructive ways, and inability to take a hint – the first human left his creator with little alternative but to escape into the heavens. Unable to follow, the first man in South Africa stayed and laid the foundations of civilization and culture in those reaches.

But what exactly was he left with? The region was not without its peculiar creatures which dwell both in the sky and under the waters of its great rivers and waterfalls. This was a place of surprising danger where they had been left to remain, where creatures of unusual origin roamed and threatened to kill the people of this fledgling civilization. And, while spoken of and depicted in legend as far back as possible, several of these creatures are sometimes thought to still wander those lands to this very day… 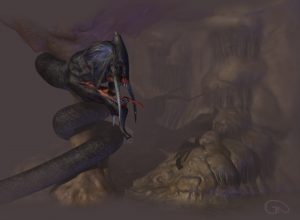 Being from a place with impressive animals to begin with, the creatures which become legend in Africa are understandably impressive. Central Africa even presents the possibility of creatures which may be or have descended from pterosaurs. But as you leave the central reaches of the continent into the southern half, you start to find legends of creatures which resemble legendary creatures of other parts of the world. These beasts, while similar to chimera, thunder birds, or serpents of other cultures, are deeply rooted in the natural dangers of the land they originate in. Representing both animals and forces common in the region, these creatures have deep ties to people’s fears of storms, disease, and threats from the deep.

And representing two out of the three, we can start with… 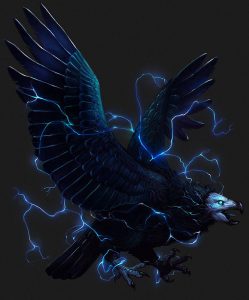 A creature held under the sway of a powerful witch, the Impundulu goes by many names and is seen in many forms. However, the name “impundulu” itself is more than enough to describe why it would have people in awe, seeing as it translates to “lightning bird”. Capable of shape-shifting, casting curses on behalf of their masters, and being used as a source for several medicines – the greatest power of the Impundulu is their ability to control storms.

Standing at least as high as a full grown man, the Impundulu is already an impressive sight as a large black and white bird of prey. But with its powerful wings it’s known to be able to create great winds and rough storms. With its talons, it’s able to create lightning and strike whatever it wishes. Together, these two properties give the Impundulu the ability to control the weather at the behest of its masters. However, an impundulu without a master is known to cause nothing but chaos, and some of the worst storms and diseases may be caused by one out of control. 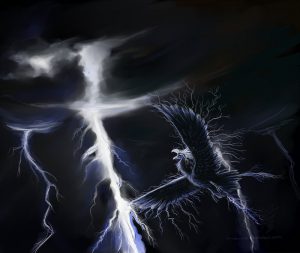 To maintain this control, the witches who give their orders need to ensure that these creatures are well fed. Taking the form of an attractive man, the Impundulu will be allowed to feed on a village by its masters. An impundulu drinks blood and feasts on both animals and people – able to kill an entire herd or family in short order. Though often fatal, these attacks may leave survivors from time to time and introduce a dangerous disease which will cause the surviving victims to slowly waste away. Though a cruel fate, an improperly fed Impundulu can go berserk and kill far more people if left unchecked. To ensure that this never happens and also to maintain the power for themselves, an impundulu’s master will pass on control of the creature from one generation to the next from mother to daughter.

But not all chaotic weather can be attributed to the Impundulu, because other things also happen to roam the skies and the waters below….

Dating back to the dawn of humanity, stories have been passed down for millennia of massive winged eels which travel the South African landscape. Described as gigantic eels with horse-like heads, finned manes and massive fins for wings, these Eels, thought to be giant versions of the already massive freshwater eels common in South Africa,  strike a terrifying figure which has been depicted even in cave paintings.

Though believed to frequent certain waters, particularly under great waterfalls such as the Howick Falls, the Inkanyamba are known to be migratory predators traveling great distances – leaving their location vague at any given moment. Moving to follow their food supply, these creatures are aggressive carnivores which have been sighted miles from their native waters. Though thought by some to simply be larger than average freshwater eels common to these waters, the aggressive and violent nature of these creatures is unmistakable and their patterns are well known by the locals. 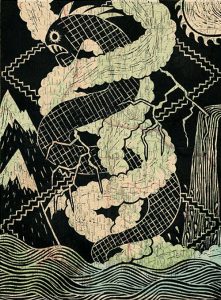 In the summer, these creatures are often absent from the waters, instead traveling into the skies to find a mate. As they do, the power of their wings is said to cause tremendous storms and even tornadoes which are thought to mark their rise into the heavens. Once a year, they make this migration, and during these times it’s thought that the waters are safe(r) while the weather will continue to be chaotic. 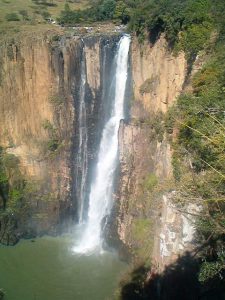 However, despite their migratory nature, these creatures are still fiercely territorial – returning to roughly the same waters with their newfound mates every year. And, once they have returned, they will attack anything that happens to enter their grounds – including other Inkanyamba. In fact, should people watch the waters carefully, it’s said you may sometimes witness two Inkanyamba battling ferociously over space, resources, or even mates. Alternatively, if you’re lucky (or unlucky, depending on your view), you may even witness a mating ritual – though witness accounts say these two events don’t look much different from each other. 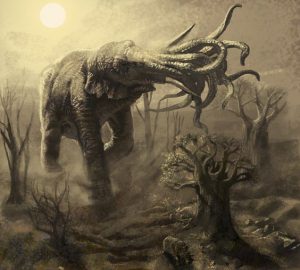 Stretching across the western coast and down into the south, tales tell of a creature which was created in the earliest days of the world. The Gods, inexperienced still at creating new life, did what they could to make great beasts with all the traits they would need to thrive in the new world. But in the process of doing this a mistake was made: they created the Grootslang.

Growing up to 60 feet long, the Grootslang is said to be an elephant-like creature with a massive serpent’s tail and sometimes even fangs. Alternatively, it can be a gigantic snake with an elephant-like head. But in either case It lurks in deep waters or in the darkest caves, and despite its tremendous size and strength it is known to use great cunning to lure its prey into these places. Even today, the Grootslang is said to kill and eat Elephants with ease.

But the Gods realized they had made a great mistake – the creature was too large, too powerful, and too intelligent. It was quickly becoming a dominant creature and they knew that it could not be allowed to exist in their new world. And so the Gods came together to do what they could with this creature and divide its traits evenly among two new beasts – the snake and the elephant. 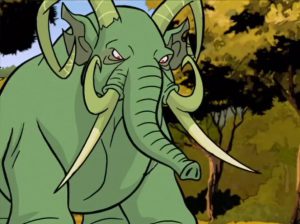 However, a problem with this plan is that they had done it far too late. One of the Grootslangs managed to avoid being split up, and though not enough to dominate the world, was more than enough to give rise to all Grootslangs said to exist in the modern day. These descendants, fond of warm, damp places, live along the Orange River in South Africa and in caves connected to the sea. They lure unsuspecting people into the river or into these caves, like they would the elephants, and are said to devour people just as easily as they do any other creature.

But, the Grootslang is not a simple minded creature and, despite its fearsome power, can be negotiated with for the right price. Said to hoard diamonds and other precious metals and stones, the Grootslang can be persuaded to show mercy if someone happens to have some available. Because of this, the Grootslangs’ homes are said to be filled with treasure – though this may just be a trick to lure more humans into their trap.

And that’s really not somewhere you want to be.

(I write novels and I post tweets. Neither of these provides me with enough to bribe a Grootslang, so I’m going to avoid the place for a while.)