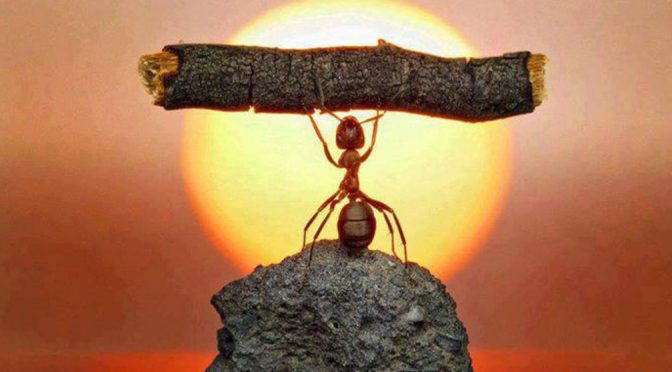 Creative professions are infamous for being full of people who are wrought with self-doubt. Though it’s easy to overlook it in others, I’ve rarely encountered someone who doesn’t have at least a little bit of doubt. Even the most famous of us will admit to having touches of imposter syndrome and a need to constantly reaffirm that they deserved to be where they are. We all know this on some level, so it’s not news to anyone. After all, if you’re here, it’s likely you followed a link about writers and you’ve felt it in yourself from time to time.

Frequently the advice that we get is about trying to simply be “okay” with the fact that voice exists and remember that the only way past it is to just keep going. The longer you keep doing what you’re doing, the more your chances of overcoming it will become. And that’s not terrible advice, you shouldn’t let it stop you even if it’s always there. But what I’ve long felt is that there’s something else that we really need to do with that voice to take ourselves to the next level…

Dealing With The Boulder

The nagging little voice inside is probably the greatest enemy of any creative type, amateur or professional, as it is generally the inner critic that will not shut up. We’ve seen the tortured artist trope for as long as artists have existed and have sometimes even had people who believe they’re not doing things right unless they’re suffering on some level. Though rare, there are people who will inflict a little torment on themselves just so they can fit this stereotype that so many others achieve naturally.  But the truth is that no one really likes being this way, and when we seek advice we rarely find anything that could be considered actionable. You’ve just “got to be good with who you are” and “just keep trying no matter what” that little bastard says. Then hopefully, someday, you ignore it well enough that it doesn’t slow you down anymore.

But I’m pretty sure that’s part of why so many creative types fail.

One of the things I realized years ago was just how many times the success stories talk about how they were “just about to quit” before they made it. It’s a fairly large number when you listen to them. Sure, several also managed to hit success right out of the gates, but the vast majority found that the early stages of their career could best be described as “unpleasant”. The early stages of an artistic career are essentially learning to eat shit and be happy with it, and if you can’t, then you join that statistic of people who never “made it”. Will everyone “make it” if they just keep trying? Clearly not. But the majority of artists who can be counted as “never making it” are the ones who quickly realized the first couple years of their career were like taking the place of Sisyphus while everyone sits by critiquing how you’re pushing the rock. 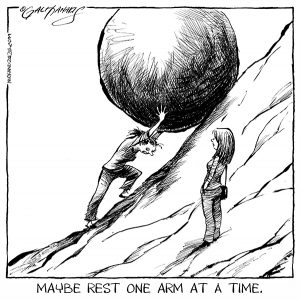 And one of the voices playing backseat Sisyphus is your own internal monologue. And, while most of the people on the outside will someday accept you’ve made it, it’s generally rare for successful creative types to feel like they’ve done enough without becoming egotistical assholes. It’s unlikely you’ll ever actually push the rock hard enough to satisfy your own doubts. Imposter syndrome, while rarely spoken of, is strangely more common than we’d care to admit in our field. But if the answer isn’t to try to overcome it or even ignore it, we have to do more with it. And, lately, I’ve come to realize that means embracing it, manipulating it, and putting it to work for you.

And the key to making it work for you, at least as far as I can tell, is to force it to be constructive. 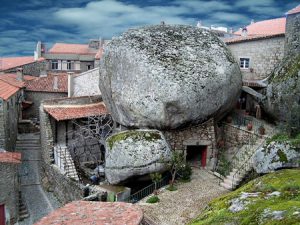 Think about it, when we give criticism to each other we tend to categorize it two ways – either it’s constructive or it’s not helpful at all. We all learn early on to be as constructive as possible and to tune out the people who aren’t being constructive. If you show your work to someone and they shit on it without any solutions, you’re told generally to ignore that person. Yet, when it comes to our own inner voice we tend to give it a pass on being vague and directionless. You rarely have a specific criticism from that voice of doubt, it sticks to the generic and nebulous. You’ll never make it. No one is going to like it. You don’t deserve for this to work. These aren’t “constructive” by any stretch of the imagination, and certainly shouldn’t be considered helpful.

So what happens when you start to force it to be constructive? This seems like a tough task but it’s not so much a matter of changing the way the doubt sounds but changing how you react to the doubt. A lot of people hear that voice and will be tempted to simply listen to it and wallow in it, rarely taking time to question it. But were it to be someone outside, either we’d ignore it completely or begin to question it aggressively. And, frankly, if forced to be constructive or challenged on what it’s saying, that inner voice shouldn’t be any more powerful than those outside.

Why wouldn’t someone like this story? Why is it that I wouldn’t make it? Why wouldn’t I deserve this? It’s a simple challenge to an otherwise uncontested influence on our behavior, but if you stick with it you can start to make it into something useful to you – because generally, if there is something worth doubting, there’s an answer and a solution that you can find. Why wouldn’t you make it? Well maybe your marketing isn’t quite up to snuff, maybe you still need to polish your style, maybe you simply haven’t been at it long enough. Why wouldn’t someone like it? If you can’t think of a solid reason, you’re just being negative without cause, and if there is a solid reason – well you can certainly fix that can’t you?

The inner voice of self doubt doesn’t have to be the thing that derails us, it can be used to push us towards improving if we’re willing to challenge ourselves when it comes up. And if we don’t know the answers to the questions that we ask ourselves, at least we’ll have identified something we need to learn. There’s nothing that can’t be addressed appropriately if you’re willing to examine it objectively and not simply wallow in self-doubt and sometimes even pity. And there are certainly places out there where you can learn to fill the holes in your repertoire when necessary – most of them only a google search away in this day and age.

Questioning the voice, challenging it, won’t necessarily make it go away since it’s unfortunately a part of you. But you can make it less of a negative impact on your life. That’s going to require a lot of patience with yourself and the ability to stick to simply questioning your own way of thinking. Most importantly, you have to stop letting the thing be dead weight, because that’s when it’s going to start getting us down and that’s when it pushes us into that unfortunate statistic of people who failed to launch. The boulder is heavy, and it’s crushed a lot of people in the past, so if we can’t get our own inner voice to help us with the thing…

It can hit us even after we get some shiny award.

(I write novels, dabble in screenplays, and tweet. None of them are award worthy yet, but I’m working on it, come hell or high water.)