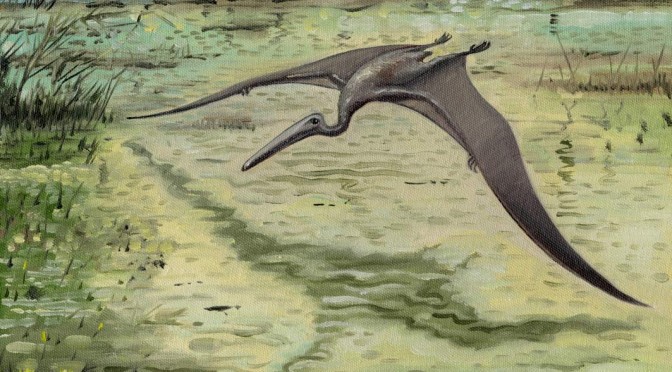 In fact, most creatures in the region have at least one of three traits: they’re either big, shapeshifters, or hungry… go figure. 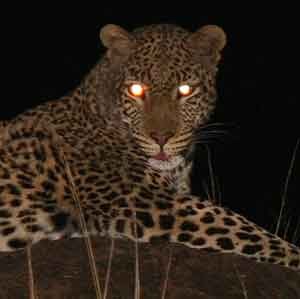 Though there is sadly little left of some cultures that formed in Central Africa, long assimilated into other religions and cultures that migrated in from other nearby regions – the local folklore is always somewhat there. Ancient beliefs will often survive to the modern day in superstitions and cryptids that go on to haunt the imaginations of the people living in these places for generations to come. And in a region that resists the manipulation of man better than almost anywhere else on the planet, Central Africa gives people a lot to be curious and afraid of.

In general, the stories that survive to the modern day are of those things which most represent the kind of danger and mystery nature presents to those living in and around it. It’s no mistake that Tore, the god of the forest and hunters, is also a god of death and appears to the people as the kind of beast that could creep out of it and drag them into the night. But, by the same token, Tore is also responsible for placing animals in the wilderness for hunters to catch. Despite being the thing that will eventually kill them, he is also the entity providing them with what they need to live. This kind of paradoxical relationship to the environment makes a lot of sense, a respectful fear of what the rain-forest is capable of while understanding they live because of the resources it provides.

And these sorts of juxtapositions dot the mythology of the land from the big things, like the two sides of Adroa, to the lesser details like…

The Mbuti Giants and Dwarfs 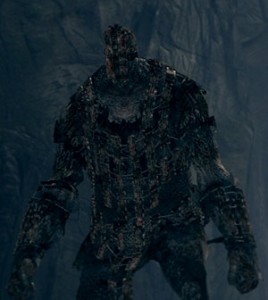 Two things which were heavy on the minds of Mbuti (so-called “pygmies”) were the ideas that the forest was something deeply tied to them and that, if they weren’t careful, it’d try to eat them. The aforementioned Tore was specifically a Mbuti god to begin with, but he wasn’t the only one to represent this sort of idea to them. Other entities happened to mirror these sorts of ideas as well and, while many of them have been lost over time, we can see the earmarks of these ideas on what little we do have today.

The ability of turning into an animal, for instance, is mirrored in a dwarf known as Obrigwabibikwa. Though little is available on this creature in many places, some things can be gleaned from what we do know about it and the other entities in Mbuti society and religion. The first thing to keep in mind is that, when the Mbuti, a people known for their short stature above all else, call another entity a “dwarf” – that must be an incredibly small creature. And this creature, like Tore, is also bonded to nature and capable of shape-shifting into an animal. In the case of this dwarf, that animal is a lizard. 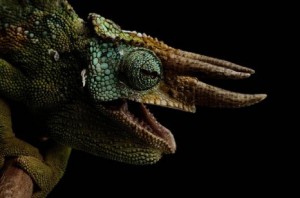 While this seems like a  strange choice for something to turn into in the middle of a jungle environment full of more impressive forms, for the Mbuti it holds significance. Lizards, particularly the chameleon, may be used by the creator god Khonvoum to communicate with the mortal world. So this entity, small in stature and capable of turning into a reptile, associates itself with the forces of order in the universe and the creator god himself. 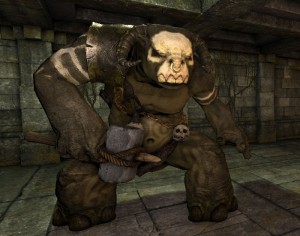 Meanwhile, at the other end of the spectrum stands Negoogunogumbar, a fierce giant – often described as an “ogre”. Though few descriptions exist of what Negoogunogumbar would look like, what is known is that it is usually associated with the European ogre in the way it looks and behaves, suggesting monstrous features on a towering brute. This giant, standing high over the Mbuti people, is known to eat the Mbuti, particularly their children, and represents the more dangerous forces of the forest that could drag them away and devour them whole.

So, essentially, tall people are scary, short people could be helpful.

But this sort of juxtaposition isn’t isolated to the Mbuti. In fact, while Tore may bring life and take it, and there may be two prominent figures representing near polar opposites, the two sided nature is actually somewhat stronger for their neighbors the Lugbara, who have… 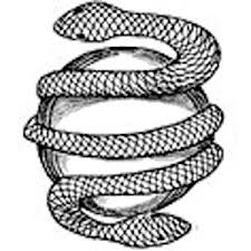 Mentioned briefly last time, the Adroanzi are the children of Adroa, the creator god of the Lugbara religion and the two sided god that split himself in half to achieve perfection. Adroa, the good and pure side, left the domain of the living and ascended to the heavens, leaving behind Adro – the dark and twisted side. Through Adro, the Adroanzi are born and, like their creator, these creatures feature a conflicting nature drawing both reverence and fear.

The Adroanzi exist as great shadowy water snakes, lurking in the darkness and existing like shadows themselves. As humans walk the jungles, the Adroanzi lurk in the darkness and watch over them, emerging from hiding and following them directly through the night. These powerful entities are massive, shadowy snakes, and though you would assume that they, like Adro, were hostile to humanity and filled with darkness, they spend much of their time protecting the humans that cross their path from other forces such as wild animals.

However, this protection comes at a price. The Adroanzi, existing in the shadows, must never be seen by mortals and anything that does see them is to be killed and eaten. For the creatures that may harm the humans walking through the jungles, this is the fate in store for them for getting too close. But for the humans, the urge to look back at the slightest noise or sensation is a dangerous one, as any who look back at the shadows the Adroanzi may be hiding in will meet the same fate as anything else. 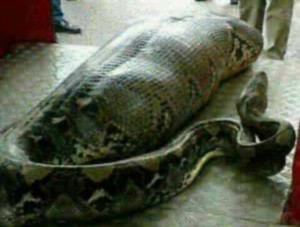 The origin of a tale like this is easy enough to understand, given the number of massive predators living in the region already. But beyond that there is also a tie to the nature of Adroa  himself. Like Adroa’s pure side, the Adroanzi are not naturally hostile to humans, even protective given the right circumstances. But, like Adro, they hold a dark side which can’t be denied, the force that makes them hide in the darkness and act on their instincts when discovered. Once again mirroring the forest around them and the sort of mysterious creatures that may live within.

In fact, one creature that they believe in, the kind of creature inspiring such stories, has survived so well into the modern day that many Europeans even claim to have seen it. This creature is known as… 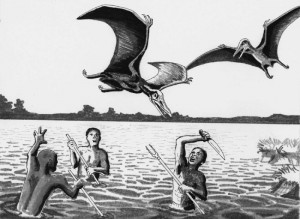 Alternatively known by either Olitiau or Kongamato, this creature is said to have wings greater than anything known to live and is alternatively described either as a gigantic bat or a winged lizard.  The name Olitiau is a word for demonic entities for at least the Ipulo people of Cameroon, an entity they often depict in masks used for rituals. But as Europeans entered the region the stories of these creatures grew greater and they began to speak of the “Kongamato” – a creature roughly fitting the same description and attributed to the entire Congo region. Though these two names come from distinctly different languages, they come from the same countries, and their sightings are usually seen as interchangeable.

What is often agreed on is that the wingspan of this creature is something to the tune of 6 to 12 feet across, that it has powerful jaws full of razor sharp teeth and that it may even have a beak. Its color is described as being either black, brown, or a deep red – depending often on the region and which of the names it’s attributed to. Many times the people who describe seeing an Olitiau focus heavily on the idea of it looking more like a bat with some bird or lizard like features while those using the word Kongamato see it more like a bird or reptile with bat-like features. 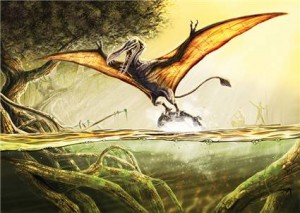 It’s supposedly nocturnal and only found in the deepest parts of African swamp-lands, where few people are able to reach it outside of the locals – who stay isolated from the world beyond. Those who wander too deep into the wilderness often describe it attacking them in the night, leaving them severe wounds from bites or crashing against the side of their boats and trying to overturn them.

The juxtaposition here, the thing that really makes it bizarre, is the fact this is classified as a cryptid and may, in fact, really exist. As strange as it would sound, being of such a huge size and with conflicting features, some people honestly believe they are out there and that the locals have simply learned to live with them. Theories range from the idea it may be a particularly large kind of stork or a misidentification of one of the giant bats in the region. Some even believe it could be a surviving species of pterosaur. 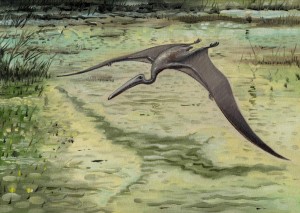 But the thing is, like with the Adroanzi and the creatures of Mbuti lore, the idea of believing in this thing makes perfect sense. Deep within the heart of the forests and swamps of Central Africa, a great many things exist which are large, powerful, and capable of taking a good chunk out of you. And, even with a six foot wingspan…

It wouldn’t be unheard of.

(I write novels and I tweet tweets. Thankfully they’re easier to find than information on the Negoogunogumbar.)