For the long time readers of this blog it shouldn’t come as any surprise that I’ve been watching Star Trek since I was a child and to this day still watch the reruns. In fact, in the last couple of years I’ve been watching the H&I “All Star Trek” block every day. As a result, though I don’t actually pay attention to every episode (I’ve seen all of them several times before), reruns of Star Trek have been running as the background track to my daily activities for quite a while. It’s habit, mostly, and every once in a while I’ll look up from whatever I’m doing to either watch one of my old favorites or come to recognize some of the flaws that I overlooked as a kid. The franchise taught me a lot about speculative fiction, for better or worse, and to this day I appreciate it for what it is – flaws and all.

One of the flaws that Trekkies debate constantly is just how consistent some aspects of the world actually are. Continuity is a big deal to the average nerd, and continuity tends to get stepped over often for the sake of an individual episode’s plot. As I’ve said in the past, while the little details may not necessarily matter to the plot, they’ll usually matter a lot more to your audience than you expect them to. And one of the greatest inconsistencies in Star Trek over the decades lies in the distances they travel and how fast they actually do it. Everyone is familiar with the idea of “Warp Speed” and has an understanding that it’s faster than light, but only Trekkies are aware that there are times when Warp Speed is sometimes less about the speed of light and more about the speed of plot.

“Oh god,” I can hear you saying, “a Trekkie is about to complain about numbers, just like mom warned me would happen.” 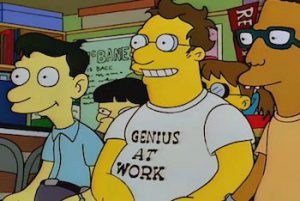 Because, when you really look at those numbers you realize something: the writers rarely had a clue of what any of them meant – so how could we? END_OF_DOCUMENT_TOKEN_TO_BE_REPLACED