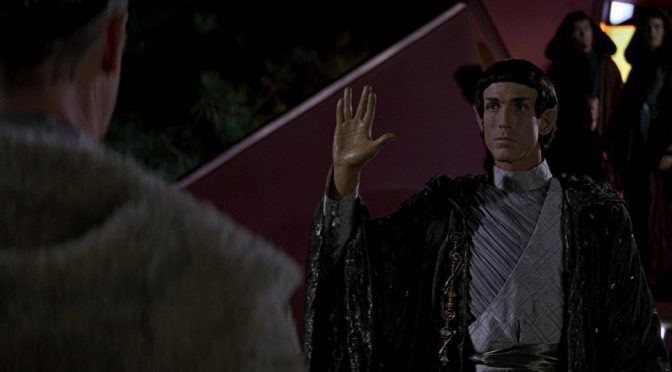 It is one of the oldest plots in speculative fiction: our protagonist, through some fantastic means, has come into contact with an alien race for the very first time and is faced with the knowledge that we are not alone in the universe. Either the aliens we meet are so far beyond us that we have a difficult time adapting to their very presence, we come to meet them as equals, or (more rarely) we’re the advanced species who’s happened upon more primitive life. And while the details within these three categories are usually pretty diverse, there’s usually a flow chart within each of them that will show the general direction our story is going in. After all, while the specifics will always be different, there’s only a handful of outcomes to really be had: we’ll be friends, indifferent to each other, or…

And one of the common elements within all of these possible stories is that, if we are aware that contacting aliens is a possibility, there will be some sort of “first contact protocol” or a general order about how we’re to treat other cultures. These orders are very rarely complicated and will usually be a simple set of rules that everyone’s to follow with little room for interpretation (though our protagonists will generally ignore that part).

One of the most well known and duplicated of these orders is Star Trek’s Prime Directive, General Order 1, or “non-interference directive”. The Prime Directive is simple: Star Fleet (or whatever organization exists in your universe) is not to interfere with the “natural development” of an alien civilization. This has a lot of far reaching ramifications and moral quandaries in it (all of which make for good stories), but one thing always bothered a little about it. There have always been debates on the morality of the Prime Directive, which was kind of the point of it from a writing standpoint, but usually those debates have to do with the morality of action vs inaction. But one of my problems, one that isn’t talked about quite as often, has always been about the general timing – and a TV show recently got me thinking about it again…

The Prime Directive has always been very clear that civilizations which are “pre-warp” should be left untouched, regardless of their level of sophistication. The argument has always been that contacting these civilizations before that contact would be inevitable could somehow damage the less advanced society. What if they managed to reverse engineer antimatter reactors and accidentally vaporized their atmosphere? What if they flew into a mass panic as their view of the universe was upended? What if the knowledge of their lack of advancement turned them xenophobic and militaristic? They’re all fair questions to ask, but I’ve always felt there was an important detail missing and a recent (as of this writing) episode of The Orville reminded me of it. Making contact with a new civilization, the crew of The Orville explained that the Union (who are totally not the Federation) always made first contact once a society was able to start communicating with space.

Why? Because they wanted to make contact before a more hostile race could.

It’s always kind of puzzled me that the Prime Directive prohibited contact with civilizations at what could be considered the most dangerous time in that civilization’s existence – that window between simply broadcasting their location and being able to do something if anyone happened to answer. The fact is, sending a powerful broadcast signal into space is a lot easier than physically going there. In fact, it’s so easy that – despite the fact we haven’t personally landed on the next closest planet yet – we’ve been sending out signals strong enough to be detected by an alien civilization since the 1930s! So we’re currently in that time ourselves, as many sci-fi authors and actual scientists have pointed out.

Stephen Hawking was fairly convinced that any contact with aliens at this stage in our existence would be catastrophic for us as they would almost certainly destroy us. In his estimation, and that of many others, our own history has indicated that more advanced civilizations inevitably dominate less advanced civilizations. Now, I’ve never felt that aliens would exactly mirror our own history and our baser instincts – they evolved on another planet after all – but many franchises with this sort of philosophy in them have races that do present that kind of threat. And yet, time and time again, we generally see our science fiction protagonists decide to leave younger civilizations, like us, to continue to act like lighthouse beacons to allow the “natural development” – even if that development happens to lead to invasion by another race who have no such rules.

This is particularly true when you consider how dense civilizations actually are in some of these franchises. Though quite a few more modern franchises will have alien civilizations spread thousands of light years from each other, Star Trek and others like it establish universes absolutely packed with life. In fact, most of the civilizations featured in the original series are within a few dozen light years of each other, the Romulans even sitting within 40 light years of Earth and the Klingons somewhere around 100 light years. But, despite this, while we’ve been broadcasting our location for ages, the Vulcans didn’t see fit to make contact until we demonstrated the ability to catch up with everyone else. And, while having some logic to it, there’s a lot to be said about what could have happened if someone else noticed first.

In the last decade, an international best-selling trilogy of books by Chinese author Liu Cixin explored the dangers of this very stage of our development. Known by different names depending on your region and preferences but usually called “The Three Body Problem” trilogy in China, the trilogy revolves around a series of events that unfold as an alien civilization detects our signals and respond violently. This, in itself, isn’t unique since that’s a time honored trope of the genre. But one thing that it did raise that was pretty noteworthy was that a friendly alien responded first with, to paraphrase, “shut up, they’ll hear you.” There’s debate about whether or not that would be realistic, or if it would even matter if the signal were already out there, but the idea is still interesting.

In fact, from where I sit, it feels like the least our protagonist civilizations could do – but I’m not sure I would end it there.

In 1985, Carl Sagan published a novel called Contact that presented a wildly different take on the whole situation. Detecting our signals and realizing we were here, advanced aliens respond to us with a mirror of our own signals and schematics for a machine they want us to construct. After some debate and a race to build competing copies of the machine (it was written during the cold war, after all), a crew takes the machine on a journey through a series of wormholes to come into direct contact with this advanced civilization. The machine was a way for these aliens to talk to us in real time so they could inform us of the current state of the galaxy, their understanding of the universe, and give us a little hope. And, sappy as it might have been, when I really think about how I would want us to act if we were ever that advanced civilization…

I would want us to be that reassuring voice in the vastness of the universe.

(I write novels and dabble in screenplays. If you wish to make first contact with me, follow me on Twitter. I promise not to destroy your landmarks.)