Fall of the Alters 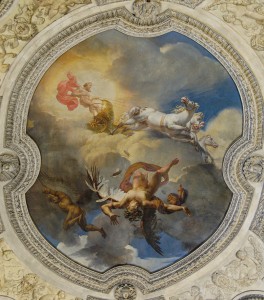 Though the influence of Alters was on the rise in the East as the Anunnaki migrated into Asia and began establishing early civlizations there, the same did not hold true for the west. Following the late actions of Atlantis, the imposing of dictatorial rule by the Olympians, and the war which followed – Alter perception had begun to sour greatly among humans who had previously seen them as gods. Further, thanks to the actions of Prometheus, the humans were now equipped in part with means of fighting back. As the conflict between the Alter factions continued, it was soon found that the humans began to stand as a third faction that was beginning to greatly outnumber the other two.

The first signs of this dynamic shift began in the portrayal of the Alters. Previously favorable, with stories like the Olympians righteously striking down the Titans or Ra banishing Chaos, the stories to propagate through the people now centered more on the crimes and abuses of the “gods”. This was particularly true in Europe, where the Olympian faction had already been quietly disliked by the people under their rule. Stories of assault, torture, unfair punishment and petty feuds became prevalent as the people slowly shifted from reverence to simply fear. With the introduction of means to fight back, this fear slowly declined and prominent figures began to rise as heroes. 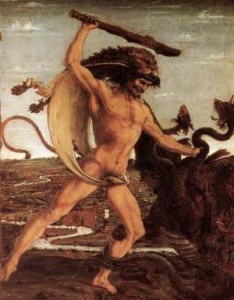 These heroes, ironically, were generally “Fae”, Alters with predominantly human traits and no pronounced physical abnormalities beyond a few pointed ears or unusually sturdy builds. However, despite being fully Alter, the people chose to define these “good Alters” as demigods and mortal heroes. In their eyes, these people were only half-Alters at most who were simply defying the gods and defeating the “monsters” of the land. Before long, figures such as Cadmus, Heracles, Perseus and Theseus managed to use their exploits to not only establish themselves as legend but begin new human controlled city-states dotting the Greek landscape.

The turning point in these relations came when the growing conflicts were beginning to endanger sea routes throughout the Mediterranean. Phorcys and Ceto, merchants who had maintained trade routes throughout the time of Atlantis, were forced to send representatives to Poseidon, admiral of the Olympian navy and former commander of Atlantis’ military. Though remaining neutral throughout the conflict, Phorcys and Ceto were known to have quietly supported the Titans politically at the time. As such, when Poseidon met with the three daughters of the merchants he refused to negotiate with them and violently assaulted the youngest daughter, Medusa. Shocked by these actions, the sisters turned to others in hopes of rallying support, only to find the Olympians respond with one of their most favored tactics – character assassination. 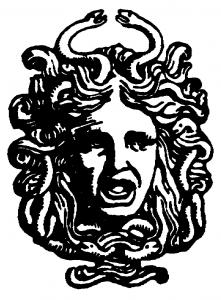 Now long described as hideous monsters with snake-like hair, the Gorgon sisters were in fact described in Argyrean texts as beautiful women of Egyptian heritage with vague reptilian features. Despite claims to the contrary (established by the Olympians following Medusa’s assault), their hair was not made of living snakes but rather was braided in the traditional dreadlock fashion of Egypt. Stories of their murderous rampages were greatly exaggerated, and the three sisters were actually well known for defending themselves through hypnotic suggestion. Should they be able to make eye contact with an individual, they were reported to be able to induce a deep trance in the individual. This was generally enough, but in severe circumstances they could close in and use a paralytic venom. While the victim would remain alive, they would be rendered completely immobile – an effect which could result in death but involved little violence.

However, despite their immediate attempts to discredit the sisters, Olympians were not comfortable allowing Poseidon’s actions come to light. Using their stories to motivate action against the sisters, the Olympians attempted to have humans silence Medusa for them. Many failed in the efforts, but before long they were able to contact a nearby king who knew of someone who could accomplish it. Polydectes, ruler of the island Seriphos, manipulated Perseus to take the task as well. Perseus, a demigod, and thus an Alter with resistance to the sisters’ abilities, was an excellent choice for the task. Goaded into the task by the king and armed by the Olympians, Perseus set out to murder the girl he had been convinced was a monster. 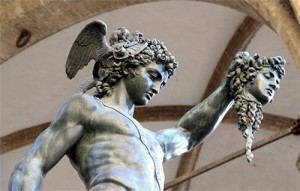 Despite attempts to defend herself, Perseus soon returned with Medusa’s head, returning to prove the deed to the king. It was on his return that Perseus found the king had lied to him and betrayed him. Though modern stories tell of how Perseus used the head to kill the king with the sight of Medusa’s head, in truth the young hero slaughtered the men responsible for the deception. As the situation settled, the message was clear – deals with the Olympians were unacceptable for even kings, and any who didn’t find a means of assimilating with human culture were at risk of being labeled monsters.

Similar events continued for some time as new city-states were built on a legacy of overthrowing the Alter leadership and “defying the gods”. Before long, the growing population and inventiveness of the humans was overwhelming to the dwindling Alter numbers and many soon did what they could to escape the growing unrest. Many Alters, deemed monsters by the now dominant humans, went into hiding or migrated to the fringes of society. Some even went as far as going to the extreme environments of Northern Europe, adapting to the brutal winters that prevented many of their human assailants from following. By the time recognized as humanity’s Antiquity, Alters had been driven out almost entirely.

Those who remained found themselves often being used by the new human authorities for their abilities. It was not uncommon for certain creatures, such as Sphinx, to be used as lethal security guards for treasures. Those who resisted and could not pass as human were often killed for their resistance or subjected to cruel treatment. The Minotaur race, once a caste of soldiers for the previous war, were of particular note as they were deemed to be too dangerous to keep around.

Imprisoning the Minotaur was difficult, given their impressive strength and stamina. Many conventional restraints were too weak to hold the powerful individuals and many conventional prisons soon had their doors and bars ripped from the masonry with relative ease. It became apparent before long that the Minotaur race (and potentially others) would require a new means of imprisonment unlike any seen before. King Minos of Crete, himself the father of a Minotaur and wishing to prevent others from discovering this secret, was at the forefront of trying to find a “solution” to this “problem”.

Conscripting the engineer and architect Daedalus, Minos funded the construction of a new form of imprisonment – the Labyrinth. A monumental maze designed by Daedalus, the Labyrinth was designed to get beyond the Minotaur strength by simply giving them no where to go. Ostensibly, while Minotaurs could theoretically find an exit with time, the sheer number of twists and turns meant that even if a few walls were destroyed it would be nearly impossible to solve from the center. Though only the son of Minos was ever recorded as being held in this structure, by the time it fell out of use there were hundreds wandering its grounds.

Life within the walls of the Labyrinth was difficult for the Minotaur people. Despite being described as a prison, the guards did little to care for the occupants and refused to feed them anything that suited their mostly vegetarian diets. While they were able to use what soil was available to grow some food, this food was limited and generally only what was dropped into the Labyrinth by birds. Occasionally, under the guise of sending humans to their deaths, these Labyrinths were further used for gladiatorial style combat where humans would fight Minotaurs thinking the Minotaur were man eating beasts. Should the humans succeed, they would be hailed as heroes, while if they had failed they were generally killed for the entertainment of the people of Crete. Even Minos’ own son was eventually killed in such a fashion, an act repeated far more often than the stories indicated millennia later. 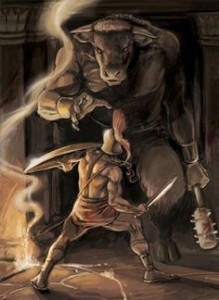 Having seen several things he considered inhumane, Daedalus became opposed to the direction Crete had taken with the Minotaur population. Realizing this, those in power put Daedalus in a tower to prevent him from escaping and informing the outside world of their designs. It was during this time that Daedalus true claim to fame came to be as he began a scheme to build wings for himself and his son to escape. It took considerable time, but Daedalus’ research and a few trials of designs gave him insight into how flight works. Though described as fully functional wings in the stories today, in truth he constructed two gliders – still far more sophisticated than anything else created in their time.

Stories to follow leveled blame of Icarus’ death on his father’s lack of foresight and his son’s inability to follow instructions. However, this, like what had been done to Medusa, was merely a coloring of the truth to discredit the victims in the process of hiding the truth. Having known that Daedalus was going to attempt an escape, the leadership of Crete had prepared for their escape and kept the tower under constant watch. As the two captives began their escape, a group at the foot of the tower armed with bows fired at the two with flaming arrows. Though Daedalus managed to avoid them, one arrow grazed his son’s glider and soon set his “wings” aflame. And, while Daedalus survived…

Crete’s story of what happened outlived him by millennia.

(I write novels and I have a twitter account. Thankfully for me, Minos is dead, so I can’t be locked up for outing the Minotaur thing)