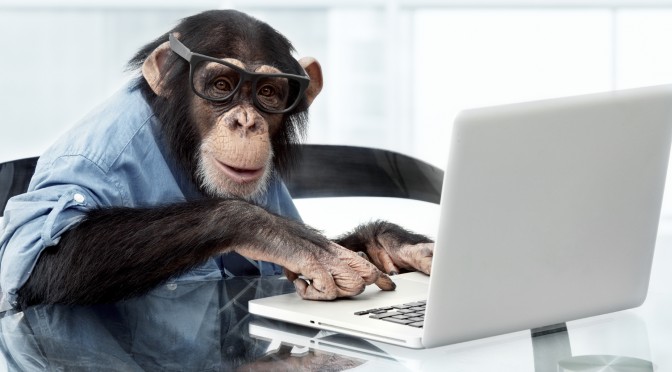 Ah, November, the weather is becoming cool and  crisp, the leaves are falling, and everyone’s using pumpkin spice to wake each other up from sugar comas. The Candyocalypse has passed and all of us are trying to figure out what to do in the time before Turkeygeddon is upon us. For many people it is a time to appreciate pumpkin spice, watch leaves fall, and take in some Football. However, the writers are going another route. Those writers among us have been stirring for a while, their mating calls echoing across the ‘net to ring in the annual season. Should you listen carefully, some of them may be heard right now: 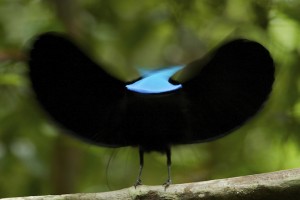 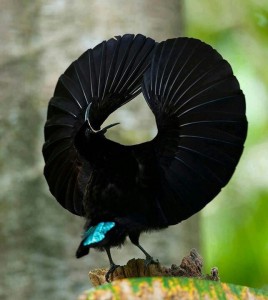 Yes, National Novel Writing Month is back and this time it’s personal. Not that it wasn’t always personal, no one is going to twist your arm. The tradition is something of a vendetta that some writers have imposed on themselves. After all, Jonathan Franzen admitted just recently on Colbert that he only aims for 6,000 works a week and yet there’s a sea of people right now declaring they’re going to average that roughly every 3 and a half days.

The number makes sense, it’s totally doable, at only 2,000 words a day you’ll find yourself done before the month is through and that’s what Stephen King tells all of us to do. The problem is, as many of you know, that number can be hard to hit consistently every single day. Still, as far as it goes, this is a good time for new people to get into the art of writing and for the old guard to have a sense of community that we sometimes need desperately. It’s okay, it’s NaNoWriMo, we can admit sometimes the only people we talk to are our pets and our growing psychosis. 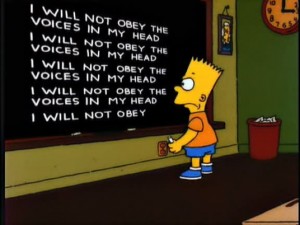 But for those new people, it’s time to warn you a little about what you’re getting into. You see, there are a lot of colorful characters out there and some of them may draw some ire out of you. That’s fine, but it’s best we warn you now so you see them coming… 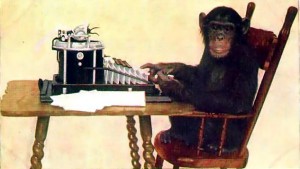 Ah, NaNoWriMo, where writers of all kinds come together to celebrate community and push forward for the next month to do our best. Most of us are going to just keep our heads down and keep our noses to the grindstone, but there are others who will show up with some pretty distinct and easy to recognize personalities. There’s nothing particularly wrong with any of them, but the fact is they exist.

This is usually something to keep in mind for when you’re looking around because, frankly, there are times when they may make you scratch your head (or worse). You may then have some doubts about what you’re doing.  It’s easy to look at some of the quirkier members of our community and then get the impression they represent the whole community – but let’s just label some of them now and get it out of the way, starting with…

A lot of us have encountered this scenario: you’re trucking along with your word goals and you’re trying to hit that 50k when your friend, who seems to be focused on it as much as you, seems to be way off their preferred goals. Hear them tell it, they’d prefer to be hitting 3~4k a day instead of 2 and anything less than that just isn’t going to do. Some quick math and you find they’re looking to come out of the month with 90 to 120 thousand words and that just seems kind of silly in a month devoted to 50. 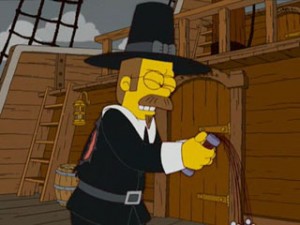 Novelists, by and large, work at a somewhat more tepid pace than the rest of the world. Churning out a book once every couple years is pretty solid work output and putting out a novella once a year would be considered prolific. But from time to time a novelist is going to run into a problem: I don’t feel like writing today, I’ll get it tomorrow. Before long, they realize tomorrow never comes and they tell themselves something that will drive them to the brink of insanity some time later.

Before long their life devolves into a cycle of cat naps, sugar binges, and drinking an entire pot of coffee in one sitting. Whether or not they survive this is primarily up to how many novels they actually have under their belts by this point. A relatively new novelist is going to find themselves hitting a wall where they crash and burn half way through only 50k while jittery and wondering if that pounding sound is their heart or the grim reaper at their door. And the seasoned professionals? 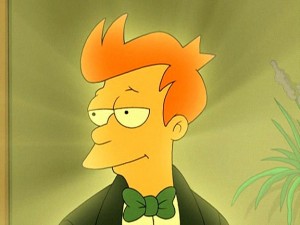 They’re going to deal with it. The point is, try to avoid comparing your work output against theirs because they’re operating on stimulants and the fear of death. Nothing runs faster than someone who’s so juiced they think the next time they sleep will be the last time. Fortunately for them, sleep is for the weak and there’s a seat in Valhalla for those who died in battle – even if it’s a fictional one. 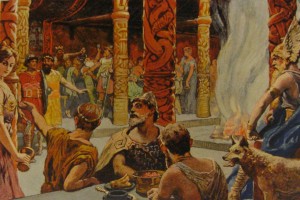 And if you are one of these people – just pretend next month is November! At that point you’re ahead of schedule. Congrats on the fantastic work ethic. Put the coffee down, we’re worried about you… 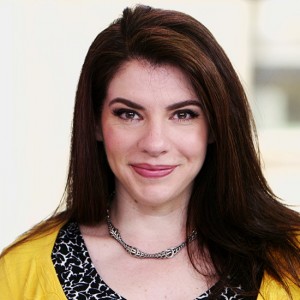 Everyone wants to believe their novel is going to be absolutely spectacular. Some of them even think there’s a chance it could be published or would be worth the risk of publishing themselves. But then there are a special breed of people – the ones who think that writing it down in one month and then trying to publish it right away is a great idea.

If you’ve ever edited, pitched, sold, or published a story before – you cringed just now. Fear not, that’s natural. But what isn’t natural is the level of belief they have that you can just churn out something in a month and have it magically work out. After all, Stephenie Meyer said she spent only a couple months working on Twilight in total and now she’s worth an insane amount of money. Clearly, this is something that can be done with raw talent and spell check. 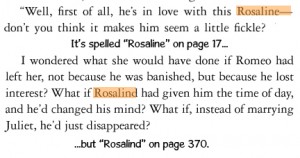 This person may drive you crazy, because a big part of what they’re going to do is talk about how great they think what they have actually is. We all like to brag a bit, but this is going to be like the parent of a new baby. Haha, my character just shit himself and threw up on me, it’s the most perfect little manuscript you’ve ever seen.

There will be some urges that arise from talking to these people for prolonged periods of time. Their lack of touch with reality, combined with their zealous refuting of any attempt to talk them down, will start to impact you mentally and physically with time. Before long, nature will take its course and you will start to have the natural desires of someone in your situation.

The good news is, if you’re having this sensation while talking to them, you’ve got a good head on your shoulders and may actually have some hope for your work. The bad news is, you might also have to work to avoid strangling what I presume to be your friend. Fear not, however, as the Hobbyist who does this will generally fall into one of two scenarios most of the time.

The first scenario is that they just simply give up on it once they get beyond that 50k and finish the month. They really weren’t serious about it in the first place, just big talk because they got caught up in it. They may get talking about this stuff again next year, but for now you’re safe – enjoy the next 11 months.

Second, they might actually try to get it published and run into the wall of reality. This will be a jarring impact that may make a few sickening noises and could result in a need for consoling them. Try not to smile too much as this happens, however, as it would be considered rude to experience joy at their suffering just yet. After all, they really put their all into that 4 weeks of their life to make that manuscript work and they were just told it wasn’t enough. That’s a lot of shock for them to take. They never could have seen that coming, no one could have… 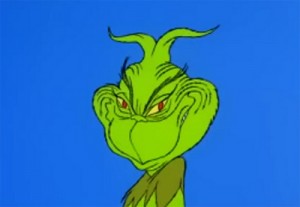 Seriously, don’t smile too much at it.

Working On The Same Manuscript For A Decade 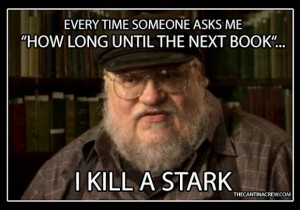 But then there’s the other side of the coin. There are some people you’re going to encounter that never, ever, seem to finish the damn thing. They’ll start the month out strong, get a few words under their belt, start to wobble and then come to a horrible end by the end of the month. It was inevitable once they actually started to reread some of what they put down. Friends and family may chime in “there’s no editing in NaNo”, but that won’t stop them. Before long they’ll have finished the month having written 50,000 words but only 5,000 added to the actual manuscript. Who knows what they got after 10 drafts on that first chapter, but you have to admit you’re morbidly curious on what’s inside.

Is it the greatest chapter ever written? The worst? It could go either way. After all, this is the 10th year they’ve written 10 drafts of that one chapter. You’re pretty sure after polishing that thing 100 times there’s a good chance it’s been distilled down to something. The only thing you can really be sure of after that is that there’s one truth about anything that’s distilled: one way or another – you’re getting drunk. 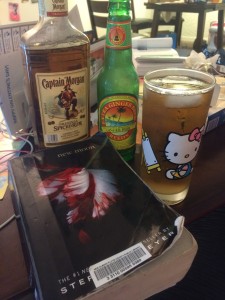 After enough time their project has become the real world application of Schrodinger’s cat experiment. The cat in that box may be simultaneously dead or alive, just like the progress on that manuscript, and you can only find out by looking in the box. The temptation is strong, if you have access, to see just what they’ve competed after so much time. 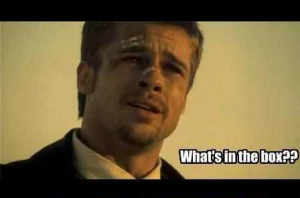 You have to see what it is, because the balancing act their psyche has been playing for years is making you so very curious. Clearly, they don’t like what they have enough to actually pull the trigger and finish the thing. On the other hand, they like what they’re doing enough to keep throwing themselves at that wall so long that there are people who started kindergarten at the same time and are now in high school. The question is… do you open it? 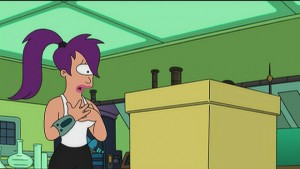 Like the cat, bit of a coin-toss, you can’t really know for sure until it happens. Sometimes the development time of a dream project is totally worth it (George, looking at you), but for others… not so much. The term Development Hell comes to mind, that point where something has been in development so long that it would literally be easier to sell your soul to the devil than to keep working on it. But the thing is, while you’re in development hell, you don’t quite realize it. After all, until you see the end product, you have no idea whether you’ve been polishing a diamond or a turd. And, really, the only way to find out…

(I write novels. I also have a twitter account. I will be doing NaNo this year… hopefully without falling into the traps.)