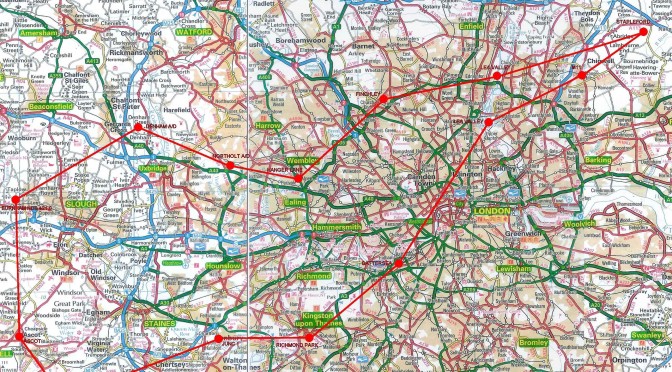 So as I mentioned recently, it’s NaNoWriMo time and there are a lot of first time writers out there trying their hand at it. Hell, there’s a lot of second or third time writers too. So it’s also time for me to give some of the basic advice that could be helpful to those people. After all, getting started is usually the hardest part of the hobby and is definitely the hardest part of the profession. So why not give a little help?

For a bit I was stumped as to what to write, I’ve spent a lot of this year providing writing tips regardless. With a regular feature on this blog being exactly this, it can be a little rough thinking of something unique to NaNoWriMo. But then a friend pointed out something that would be tremendously helpful to everyone, especially on a month where everyone is aiming for 50,000 words or more. It’ll even be helpful once the month is completed and there’s a chance you’ll find this down the line. What is it?

How do you avoid getting stuck and frustrated enough to want to quit?

It’s easy for more seasoned writers to take for granted how hard it is to break past that inertia. We all have writer’s block, but it’s really not common after a point for you to have writers block in the middle of an idea. Time and again I’ve had it hit me before even starting only to find that everything’s smooth sailing once the work is underway. Rarely is the same true in the other direction. So what about the people just starting or haven’t developed that ability to just plow ahead? Well, this post’s for you… 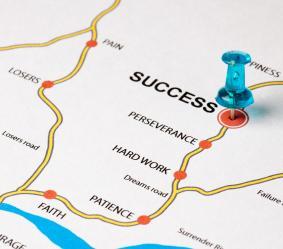 One of the words that comes to mind when defining the ability to keep going forward is “callous”. In a lot of our day-to-day lives we use the word to describe uncaring and unfeeling people with little empathy. Surely no one would ever want to be one of those. However, when I think of it, coming from more humble roots, I think of the kind of callouses a worker would get on their hands after years of hard labor. 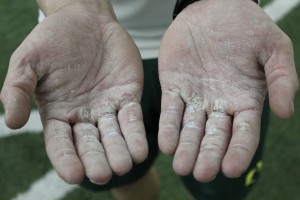 This is the sort of metaphorical callous a lot of writers develop over the years. There are aspects of our lives and occupations which we have to just learn to take the hit from and then carry on. That ability to brush off the pain of repeated inconveniences is crucial down the line. So over time, seasoned writers begin to grow a tolerance for certain things that would derail someone else. In today’s example, we have the callous that protects us from that moment where what you’re writing simply isn’t working for you anymore. A lot of people will stumble, fall back, or even quit if faced with this problem. But a seasoned writer? They generally know their way past this bump in the road, usually by… 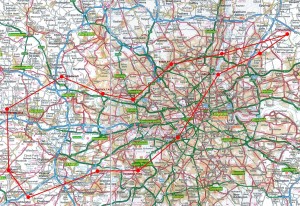 A lot of people will knwo this on a level but won’t know the full extent of what I mean. Every writer has had, at some point, an outline. The idea of working without one is even terrifying to some people. The thing is, while an outline is a really good tool, it’s not quite the same thing as what I’m talking about now.

Looking at a road map isn’t the same as looking at your usual outline. Screenwriters are particularly bothered by this at times because they’re taught to plot out every beat before they get to work. So of course, when you know every step you’re supposed to take, you tend to double check that you’ve taken every single step. Problems follow not far beyond. A roadmap, on the other hand, generally has destinations and then routes – and that second part is often overlooked.

Look up driving directions and you’ll see that, while you have your destinations (outlined bullet points), there’s generally more than one way to get to where you’re going. Every directions function on every mapping program has at least one or two alternate routes or alternative modes of transport. Someone who walks isn’t going to get from point A to point B as someone who takes their car and neither one of them is going to follow the exact same routes as the buses. 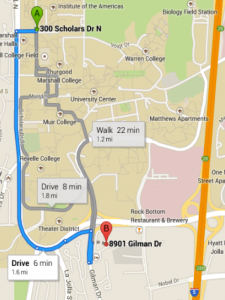 That’s where too many people get stuck, that inflexibility where every step has to be exact and you can’t quite see the alternative routes. You still want to hit your every beat, but it’s better to think of those as destinations, an indicator of the direction you’re going, rather than a required step in an instruction. If you can start loosening up how you get from point A to point B, you’ll find a lot of times that “traffic” might be slow one route but faster on another. At this point you take the wheel and turn.

The same holds true for writing, of course, an outline is really only your set of destinations and it’s up to you to figure out the route you’re going to take to get where you’re going. I actually tend to recommend that you don’t make your outline too exact. Some of the hardest stumbles are when you’ve plotted out every single event that happens between two different major events, only to find out that you’re stumbling on step 4 out of 8.

So keep it flexible, know the direction you’re going there, but keep an open mind about the different ways you can get there. Which, of course, means you also need to be… 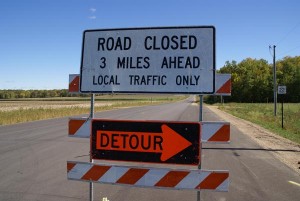 But, let’s say you’re 95% of the way through the route you’ve taken and you realize you’re way off the destination you chose. You intended to set up a pair of characters in a loving relationship, only to find that there’s way more chemistry between a completely different pair. This happens a lot for those of you with a romance angle and it can bite even the best of writers in the ass when they run across it.

One of the things about being able to accept new routes from point A to B is realizing that sometimes…you chose the wrong point B. It’s okay, it happens to everyone, but too often we get flustered with the fact it didn’t go the direction we wanted it to. This is particularly common when you start to loosen up and choose those alternate routes because, sometimes, the map is just wrong. The old road isn’t updated, there’s a new one way street, that bridge collapsed mysteriously with oddly specific explosions. Who knows why it didn’t take you where you wanted to go, but you’re there.

So, there’s a couple questions to ask yourself. First, did you really need to be at that specific location/bullet-point? If not, then it’s okay to simply reroute and head on to the next location. Sure, you missed one of your destinations, but now you’re taking the scenic route to your next place and, who knows, it might be better than what you planned.

Some would find that concept hard to swallow, that what you didn’t plan could actually be better than what you did, but it’s a truth that we have to accept sometimes to grow that callous. We like to think, as we’re plotting out our direction, that we know exactly where this all should go. But none of us are perfect, all of us are flawed, and sometimes we don’t know what’s really best for us. 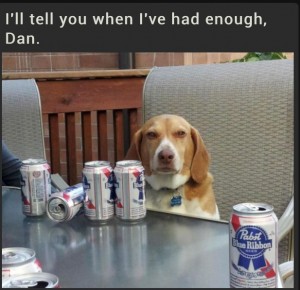 Second, if it is important, do you have to get there right now? If not, put it later in your story and see what you can do about getting to the right place the next time. It’s difficult setting it out of the order you had it planned, but double backing and starting over could force you to rewrite thousands of words and erase what might have been solid progress for little reason. If it can be delayed, it should be, and the further along you get the more you might realize it wasn’t a bad decision.

Finally, third, if you have to do it and you absolutely have to be there right now, can you change lanes? There are a lot of times when we’re not at where we wanted to be but we’re not far enough from it that we can still find a way to turn right into it. Sometimes this can lead to a great twist or a new angle. Say your planned relationship from earlier turns out to not be the one you’re enamored with, but that third wheel steps in. Now you’ve got a love triangle. 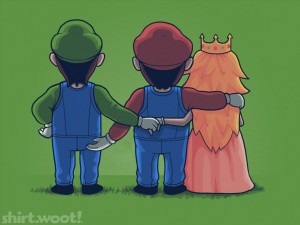 If you don’t think you can do any of these three, it’s time to reassess. There’s no plot element ever worth the entirety of your story. No matter how important it feels to you, if you couldn’t get there naturally then it probably wasn’t the natural course to begin with. Many writers have fallen into that trap of feeling a plot element is too important and have ruined a good story to force it back in. Some things really are as important as they feel, but if that’s the case…  good things come to those who wait and patience is a virtue.

Which is good, because you’re going to need a lot of patience for the next part…

Don’t Be Afraid Of The Next Draft 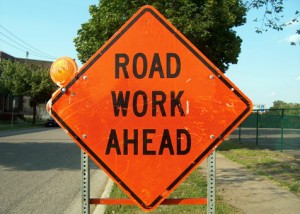 And this is the real whammy. Fear of the fact your first draft may not be perfect will often make you worry about continuing at all. We all know, deep down, that we’re going to need to edit after it’s all said and done. That feeling could make you second guess yourself a lot during the first draft (or even the second or third), until you second guess the effort at all. Why even bother writing it if you’re never going to get it “right”?

Of course, the answer is that getting it right isn’t a one shot deal. I’ve known a couple people who hated editing so much that they insisted anything that needed to be edited just shouldn’t be worked on at all. It’s akin to telling them their child is ugly. Still, roads need potholes filled, that bridge that exploded could be rebuilt, and maybe one of those routes decided on before just wasn’t the best idea after all. There’s no shame in admitting it isn’t perfect, because you’re trying and every time you put out a new draft you’re showing that you’re willing to try your hardest.

This never stops being true, either. That first draft is a test run, and it’s okay to make mistakes and not be perfect there. The second draft is when you’ve smoothed out what you can see. The third draft is when you’ve smoothed out what others can see. Every time you finish another, you’re taking a step forward. So don’t let the worry that you’re turning out something imperfect slow you down.

Holding onto some of the car and hard work analogies, you can’t fine tune an engine that isn’t finished yet. You need all the parts in there to get it started and see what you need to adjust. And once you’ve adjusted enough of it, it’s going to come out purring like a kitten. Then, with your completed manuscript, it’s time to consider maybe publishing….

Which is a brand new set of challenges.

(I write novels. You can find me on my twitter account most of the day. In the meantime, good luck with NaNoWriMo, and I’ll see you on the other side.)