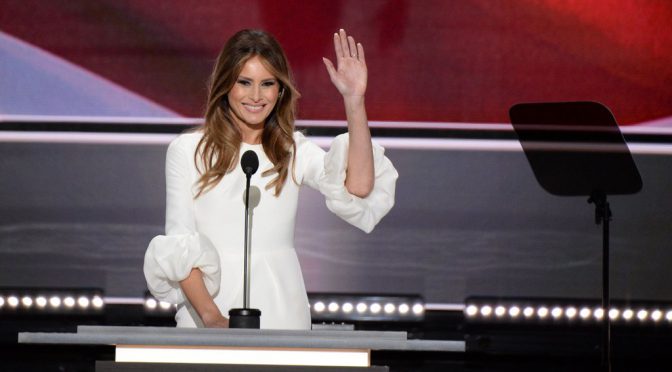 Ah, plagiarism, crutch for the underachievers and the hopeful slackers. Years ago, when the internet was still new and things were harder to search, there was a bit of a boon for plagiarists. You could look up almost anything if you had the time and dedication (well… time) to search the “information super highway” as we called it before we collectively realized that sounded stupid. From there you only needed to copy and paste it into  a text document and get blitzed for the rest of the weekend. It was a golden era right up until Google and other web crawlers made searching so simple that anyone could just quote lines right out of your work and find where they originally came from. Hell, there’s even software that’ll do it for you.

But unless you’ve been living under a rock you can probably guess why this topic came to mind for me this week. Melania Trump, wife to the future emperor of the wastelands of North America, gave a speech at the Republican national convention which was quickly noted to have lifted a significant block of text out of a speech given by Michelle Obama a few years ago. The internet was swift to not only spot the plagiarism but provide documented evidence and eventually go so far as to pick apart the rest of her speech until discovering there was a chance her speech writer might have even Rick Rolled her.

Now, of course, Melania probably didn’t  plagiarize this speech herself. She had a speech writer like most of these people do and someone within the organization has already taken credit for this humiliating mistake. Hell, a few days later, her chief rival Ivanka said the same line about “let you down”, so it’s entirely possible they had the same writer. But if it had been Melania we couldn’t really say it would have been much of a surprise. Plagiarism, despite the ease of detection, is still well alive today.

Especially from people who don’t think they’ll ever get called out on it.