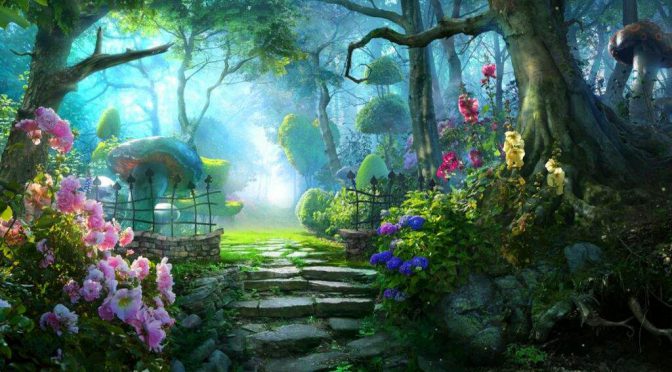 Gardening, it’s a surprisingly complex field of work for something that most people just take on as a hobby. In today’s high stress world a lot of people take on gardening as a method to unwind. The slow, gradual process of tending to a garden and watching it grow can give you hours of productive work to do that doesn’t actually require a great deal of thinking, worrying, or bickering with coworkers. As such, many people, including the psyche major working in human resources, have recommended that you should take up gardening as a method of staving off the strain of your soul-crushing job. However, after only a short time, you’ve realized something’s gone terribly wrong. 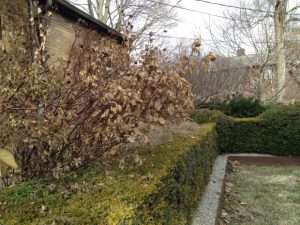 The act of growing a living thing that only requires sunlight, water, and soil should be a simple task. But anyone who has ever tried it knows that it’s filled with hidden pitfalls and challenges. You may have planted in the wrong location, over-watered, under-watered, failed to properly fertilize, or trimmed it in the wrong way. Any number of these can lead to having a dead plant in your garden. And, for some of us, it’s fortunate that plants aren’t sentient or we’d be serial killers.

But one of the greatest challenges of gardening is pest control. Pests, whether they be bugs, small animals, or simply children, are the sworn enemy of a thriving garden and will generally require you to bring out the poison. Unfortunately that doesn’t always work, with some bugs being resistant and children being illegal to poison. And for those exceptions it can take a trickier approach that may involve organic solutions or even grabbing some sort of psychological device like a tiny scarecrow or a dog that hates small kids. However, should it turn out that you can’t manage to make anything grow, it may not just be that you’re terrible with plants, you may have a pest you didn’t account for.

You… may have Pixies. 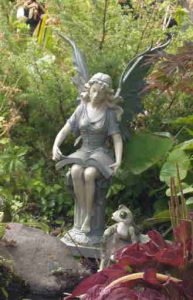 Pixies, nature’s giggling little assholes, drawn towards fragrant plants, bright colors, and fairy circles. Though rarely a problem in today’s society, the chance of pixies taking over your garden is never-the-less a possibility worth preparing for. After all, as essentially cute little human-like crows, they’re smart enough to ruin everything you do and petty enough to enjoy it. Pixies are particularly skilled with natural things, said to be able to destroy entire crops if angered or make flowers bloom in their very presence. Though you can’t quite be sure either of these are actually true, it certainly must be considered since few other things explain your terrible skills at horticulture.

But not all hope is lost. Though mischievous by nature they’re also incredibly intelligent and, if properly dealt with, helpful creatures. In the face of watching your entire garden shrivel and die under your care, a well appeased Pixie just might change your fortunes and make it look like you actually know what you’re doing. And the first step in making that friend work for you is getting a…

The first thing to keep in mind for dealing with Pixies in your garden is that the little bastards love them some sugar. Having a heart rate and metabolism comparable to a hummingbird, one of the best methods to keep them happy is to have sugar water on hand at all times. For this, we resort to the hummingbird feeder. 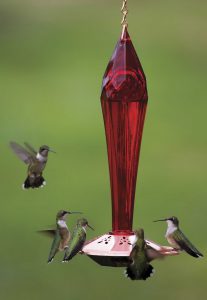 Filled with an “artificial nectar” made of one part sugar and four parts water, these feeders aren’t particularly high maintenance and require little direct attention. The “nectar” being primarily sugar water, is easy to refill and doesn’t require any preparation before being hung – simply mix the sugar into the water and you’re good to go. Once prepared, your average hummingbird feeder holds roughly as much as a soda bottle and can be hung from almost any space high enough to be spotted by a flying passer-by. Though this opens up opportunities for conflict between the hummingbirds and Pixies over the resource, hanging several should do the trick in making sure the little devious creatures aren’t going to tear your garden a new one. And, as a bonus, you’ll get to do some hummingbird watching.

An important detail to remember in the process is to ensure that whatever you hang the feeder on, it shouldn’t be made of iron. Pixies, navigating primarily by magnetic fields, have a tendency to become lost, confused, and irritated in the presence of ferromagnetic materials. An iron post to hang your feeder may seem like the rational, long-term solution for keeping your hummingbird feeder aloft, but it will also provoke the wee folk into going berserk on the area around them. In fact, in the process of establishing this feeder, it’s important to mind the location of your feeders and the supply of your sugar.

With feeders too close to your home, it is possible the Pixies may begin to get inside the house. Though harmless enough by themselves, your average Pixie can and will devour anything with sugar inside your home as quickly as possible and inform as many of its friends as possible. Those homes which have been struck by Pixies will discover their houses in a condition akin to an earthquake or tornado as creatures with tiny hands will smash, grab, and rummage through whatever they can manage while making it look like your children really did it. Placing wood posts a good distance from the house and locking your sugar away should be enough to avoid any unfortunate incidents. 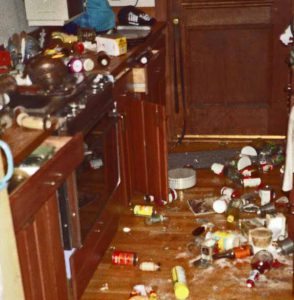 However, it should be noted, if there are Pixies in your area, the act of feeding them will lure more towards your home. The average Pixie, being roughly as intelligent as a corvid, will remember the locations for easily accessible food sources and will share this information with others. However, this is a bonus as the collective scavenging will result in them identifying your home as not only a source of food but an overall positive location. A happy Pixie is less likely to destroy all you hold dear and certainly won’t bad mouth you to their kin.

In fact, with proper incentives, it is also possible for you to attempt… 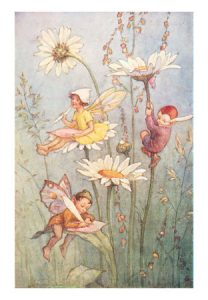 Though you probably haven’t spotted a Pixie by this point despite your best efforts, the fact remains that something has to be sucking the sugar water out of your hanging bottles. However, this doesn’t necessarily mean your garden has improved just yet. Pixies are only beneficial to plants if they so choose to be and, if your garden still requires a necromancer, it’s likely they’ve chosen the opposite. The secret now, if you’ve placed the appropriate bribe, is to start training them into helping you.

With an average intelligence ranging from crows to small primates, the Pixie is a highly adaptive and easily trained creature so long as it decides to humor you. To begin the process of gaining their acceptance it is worthwhile to begin leaving shiny objects (with no iron content within) as a means of seeing your home as more than simply a source of food. Like many birds, the Pixie appreciates shiny objects for decorating their nesting locations and will remember the fact that you set them out. Great care should be taken to ensure that you place the shiny objects in the garden and around the plants which require the most care. 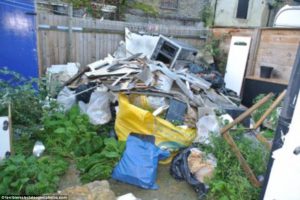 Though your neighbors may begin to complain as the shiny objects pile up in your lawn, the Pixies will certainly take notice before long. Following the shiny objects to the places with the greatest concentration, you will soon begin to train the Pixies to search the garden for these objects and they will, in gratitude for your offering, begin to resuscitate your shriveling plants. This process may take several days to weeks, but no longer than a few months at most. Few home owners associations will have had time to respond to you by the time the Pixies have, so fear not their potential wrath for your apparent hoarding.

Should the Pixies fail to take the offerings, it’s time to take stock of the situation. Despite being told that this hobby would help you relieve your stress, it’s clearly not helping and something isn’t quite right. The garden may still be dead at this point, despite your best efforts, and other things just don’t add up. Something has clearly been drinking your nectar at a fairly steady rate and, by this point, you’ve likely had to refill the bottles several times over the course of your summer. Yet, despite this, only a scant few of your shiny objects have been collected and you were fairly certain you saw a crow take off with one. Considering this, there’s only one logical, reasonable, and rational conclusion:

The Pixies are angry with you.

And it’s time to prepare.

With your garden still dying, the shiny things piling up in your yard, and the nectar being consumed – it’s clear what’s happening here. Despite your best efforts the only things the Pixies want to take from you is the food you provide them. They have no interest in taking your peace offerings with the shiny objects and they’ve decided they want no part in playing along with your gardening strategy. It’s clear now, as you look at your lawn covered in scrap metal and marbles, that the Pixies are out to get you.

Defending your home would prove to be too costly. Iron, though more than capable of warding off the Pixies, can add up as you attempt to put bars over every window and reinforce the door. Not to mention that these metals will eventually heat your home and ruin your house’s energy efficiency. And, even with the use of metal in your house, you’ll be exposed for at least 8 hours a day as you go to work (potentially longer if you take time to yell at that bastard from HR). Though your car should provide you some protection, they could still theoretically reach you on the road. You’re going to need something more versatile.

Fortunately for you there are suits that you can wear for just such an emergency. Though you may be tempted to go for a full platemail, these are generally too hot and heavy to be used for very long. Instead, it is time to consider a more modern approach. Constructed of ferrous materials normally used to conduct electricity and prevent the wearer from being shocked, the Faraday suit is a suit literally made of exactly what you need to protect yourself from the vicious little things. Sure, the Pixies are small and so far you haven’t even seen one, but they can swarm and you know you’ll soon be surrounded on all sides. Despite their claims otherwise, those who told you to go gardening were wrong about it helping with your stress. If anything, now you find yourself more stressed as you don the iron mesh hood and begin your new life.

You now eat, sleep, and go to work in this suit – this is now your life. Though some may not understand, you’ll note that you don’t see any ill effects from those vicious little bastards. You know they’re out there, and so long as you keep that suit on, they can’t get to you. It isn’t the best life, but clearly it’s the best option available to you at this time. The suit can be hot and uncomfortable, but it’s safe. And, as a bonus, to help with your stress…

You can finally take up a hobby safer than gardening.

(I write novels, dabble in screenplays, and hate yard-work. Sometimes you can hear me complain about it on twitter.)