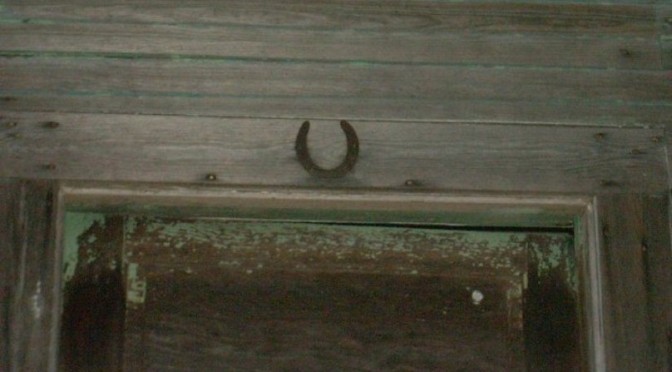 Lucky charms, they’re magically delicious, but also a little confusing. Generally the damn things don’t make any sense and most of them are powered by belief in bullshit. But bullshit has a source, like a lake feeding a river… of bullshit. After all, there has to be some sort of origin to these things or it becomes fairly easy to poke holes in the “logic”. Rabbit feet aren’t too lucky to the rabbit that lost them. And if pennies you pick up really were going to give you good luck for the rest of the day, there are a lot of old people who should be millionaires. 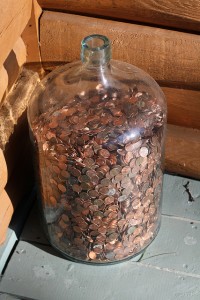 But some charms aren’t just good luck, having entire rituals around them that don’t make a whole lot of sense either. The horseshoe is a great example of this, not only being considered good luck but having contradicting and specific methods of using it. If you turn it one direction it’s supposed to do one thing, the other direction and it does another, you can even use the horseshoe wrong in some cultures and have it work against you instead of for you. And that all leads to one very important question…

What the hell is up with the horseshoes? 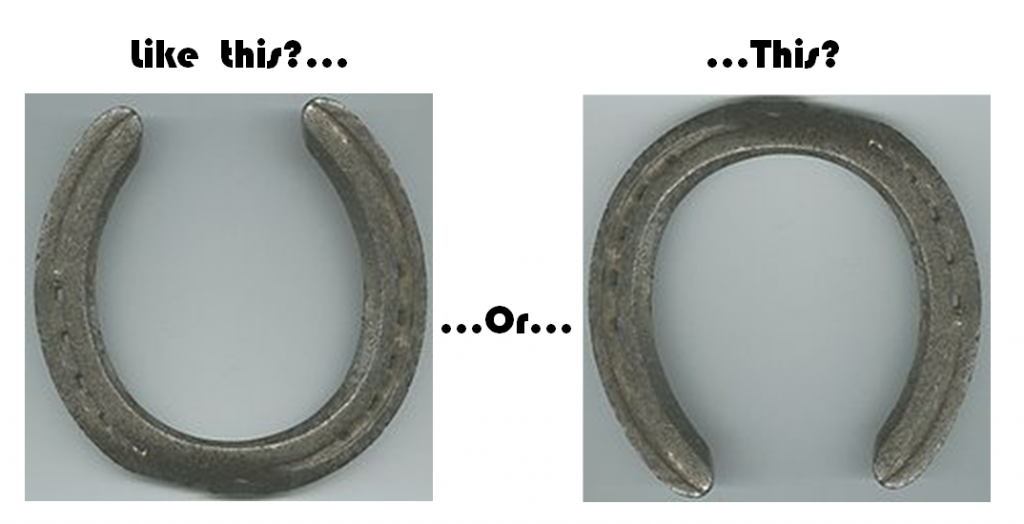 The story is that the horseshoe of the modern day is a vessel for good luck, the shape of it allowing it to capture the luck like some sort of bucket. Nailed over the top of a door with the ends facing up, this vessel will collect all the luck for the house. Turned down, on the other hand, and the luck will fall out. As to whether or not that’s good or bad depends on where you are – some say it pours the luck out over you, others say it simply lets it escape. But, however you hang it, people believe this thing is magical.

The tradition, in part, roots back to the story of Saint Dunstan, a 10th century Archbishop responsible for the reformation of the Church of England and restoration of monastic life in the country. But where he ties into this story is the fact that Saint Dunstan was also a blacksmith…. with a semi-cartoonish relationship with the Devil. 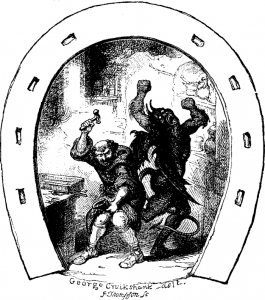 Saint Dunstan was the bane of the Devil in his time, making great strides to civilize the otherwise crazy Anglo-Saxxons and teach them in the ways of Christianity. As such, the Devil felt this holy metalworker needed to be corrupted or forced to serve him one way or another. One story tells of how the Devil disguised himself as a beautiful woman who tried to seduce the saintly blacksmith, only to be revealed as he danced around the room and having his hooves exposed when his skirt lifted. Dunstan responded by clamping down red-hot metal on the devil’s nose. 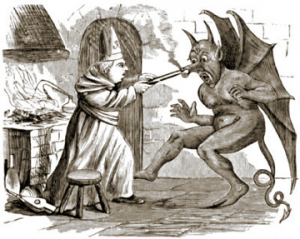 Having been defeated, the Devil essentially decided to make the blacksmith work for him in the more legitimate fashion by having him re-shoe a horse. Dunstan, not appreciating the Devil’s provocations, decided instead to nail the horseshoe to the devil’s hoof instead, causing the Devil great agony. Begging Dunstan to remove the horseshoe, the Devil was forced into an agreement by Dunstan to never enter a house with a horseshoe over the door.

According to some, this is where the tradition originates as believers take advantage of the agreement. But that falls through for a few reasons. First, the story really only accounts for the use in England. Second, it doesn’t take into account older traditions that also said the horseshoe was a force of good. And, third, it completely overlooks the fact that horseshoes also apparently scare off ghosts, witches, fairies, and everything else that could wander into the house. For that, you have to understand that, in the story of Dunstan and the Devil, the important part isn’t the fact he eventually became a Saint but rather that he was a blacksmith.

Because, in ye ol’ olden times, blacksmiths were magic. 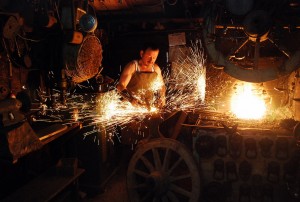 It sounds a bit ridiculous to consider a skilled laborer to be magical. But in the old days these people were the closest things to true alchemists anyone could have found. Blacksmiths took rocks, put them through fire, cooled them with water, and made something useful out of it all. To say that they were performing miracles in the eyes of ancient people would be an understatement. Stories of mystical blacksmiths extended even to the gods – where Dwarves made magical artifacts for the Aesir and Zeus’ lightning bolts were forged by Hephaestus. It was even believed that, because of their work with horses, blacksmiths could speak to the horses to get their cooperation. So when Dunstan encountered the Devil, it was not just an encounter between a religious man and the embodiment of evil, he was practically a wizard.

It’s, in part, because of this relationship with the blacksmiths that horseshoes are seen to be mystical even without the story of Dunstan. The general impression is that the things created by blacksmiths are imbued with the forces of nature and have been crafted by someone with a deep connection to those forces. But what makes it even more important is that horseshoes were traditionally made out of a material with a mystical connection – iron. 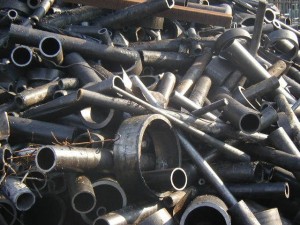 Today, we think of iron as fairly mundane, having it almost everywhere and having found better materials. But, once upon a time, iron held a fantastic status on par with fictional metals such as mithril. Like mithril, iron was the most durable material in the world – able to resist bending, breaking, and the heat of fire. These properties made it seem magical in its own right, easily outpacing the softer, easier to melt metals in the past. And, once forged by skilled hands, that was refining and strengthening the already mystical material.

Stories of evil and mischievous forces being warded by iron have lasted for centuries. The metal’s properties made it seem ideal and like it could cut anything – including magical creatures and spirits. And, while iron itself was considered mystical, many references to iron in these stories specifically refers to “cold iron”: a poetic term meaning a piece of iron that had been forged – typically into a blade. And this use of the term “cold iron” was at the center of many of the evil banishing properties of iron, which became the one true weakness for a lot of things.

Legend has it that burying a knife under the entrance of a home or building would prevent evil forces from being able to cross over the threshold. The reasoning was simple, iron itself was mystical in nature and “cold iron” was iron that had been passed through fire and forged by a blacksmith. In essence, it was a mystical material to begin with and had been transformed through a mystifying process into something sharper and more dangerous. All of a sudden, it wasn’t just iron, it was refined or even blessed.

However, outside of its ability to shank evil, admiration for forged iron even extended to uses such as preventing the dead from rising. By surrounding cemeteries with iron fences, the idea was to prevent the movement of souls in or out. This would keep ghosts from escaping or evil magics from getting in and raising the corpses. Either way, the fence being made of iron was important and, often, they would be embellished with sharp edges to double down on the protection.

It’s because of this banishing property that objects like horseshoes would eventually become associated with good luck. The old belief was that all bad luck, right down to being struck by lightning, was an act of an evil force working against you. It wasn’t simply a matter of chance, something had come to tamper with your shit. This is why so many fairies and the like are considered chaotic forces – they generally represented dumb luck.

So, as people started to separate outside forces from their concept of what caused random events to occur, the item itself evolved in the stories and how it was used started to do the same. For a time, it’s entirely likely that the horseshoe’s angle was unimportant, merely that it was there and present to scare off the bad luck demons. But as bad luck became less associated with demons and more with just being “bad luck”, the concept of good luck being influenced by the shape started to take hold. Before long, people were arguing over which direction it had to go.

Some believe the horseshoe should be pointing up to catch the luck. Some believe it should be pointing down to pour it over you. Some believe you actually have to rotate it over time so that it collects luck some of the time and pours out what it has collected later on. And others think that, for it to be lucky, it needs to be nailed up with 7 iron nails – using the lucky number 7 to get the magic to work.

In the end, there’s only one thing everyone can really agree on, whether or not you believe in luck…

The worst luck is when you see it vertical on the horse’s foot.