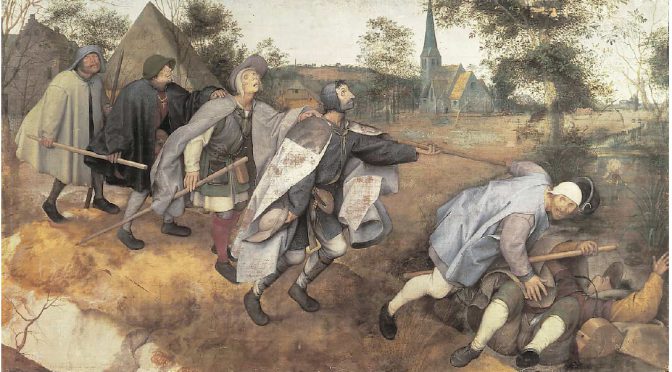 There are some fears among the writing community that are prevalent across all levels of experience. From the earliest of writers to people who’ve actually pulled the trigger and published something, you’ll find shared angst. First, of course, is the fear of rejection, a haunting little notion that someone not liking your work means they hate you. Second is that you may finish something and see nothing of value in what you sunk so much time into (effectively meaning you wasted your life). And third, of course, is the dreaded task of editing.

It’s not everyone and it’s not always expressed in the same way, but edits are generally painful. They’re basically sitting down and determining how you messed up, over and over, but then having to convince yourself that the same asshole that broke it can fix it. Somewhere, deep down, every writer fears the moment where they have to say to themselves “maybe this time I do it sober and/or well rested.” And the worst part is that any good editing process involves getting the opinion of another person – and that means opening yourself up to rejection at the same time.

Understand, if you have a hundred people reading your work and 80 of those people are positive, it’s easier to take the 20 in stride. But if you have only 2 and one of them has corrections to make – that’s gonna hurt. Sure, it’s only two people, but 50% of all people who read my work hate it. But the good news is that it’s natural, so there’s no real shame to the fact that people need to learn to cope with it. In fact, the mark of greatness is generally finding a way to deal with that feedback process in stride. Countless writers thank their editors as being the one who “does the real work”, and most of them are being genuine. Unfortunately, not all of us can be that level headed and that sting sticks some people into what I’d call the “feedback loop” – searching for positive feedback until they ruin the work.

But, you see, the feedback loop is stupid, because it requires you to forget that people are stupid. 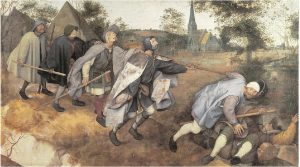 Writers, beginners especially, can occasionally be convinced the outside opinion is somehow more accurate than their own. It’s good to trust your editor, but rarely good to believe them to be somehow superior to you. I’ve known far too many people who’ve taken the word of an “expert” or someone else and decided that they needed to make sweeping changes to correct minor errors. Constantly chasing the positive feedback they start killing the good things in an attempt to try to fix the bad. Eventually this requires killing the things deep inside them like hope, joy, and rational decision making. Before long you find yourself surrounded in tattered drafts, drinking constantly, and thinking, “you know, Hemingway was doing great right up until the suicide, maybe I should go to a war-zone.”

Though, that’s a bit of exaggeration – not all of us drink, but a lot of us want to.

Naturally, the fact you’re asking for their input means that their opinion is important to you, but for those in the feedback loop it’s the most important. Somewhere in your mind you’ve convinced yourself that these people have some magical authority on what is a very subjective field. And it’s especially bad if you’re just starting, because you tend to get feedback from people who are far more experienced than you. But there’s a secret about those people that you’re probably forgetting – they’re also just smart monkeys at a keyboard.

Seriously, the human race is just naturally flawed, and that’s okay. You’re not supposed to be perfect but the idea that the people you’re asking for help might be perfect is just bullshit in and of itself. How many times have you given someone feedback yourself only to second guess your own input? I know quite a few times I have in the past – and I actually write about this shit in public. The idea anyone, anywhere, is somehow so gifted that their opinion trumps all other opinions is just bullshit you’ve shoveled onto yourself.

But then some of you are thinking: if the person in question is so much more experienced, shouldn’t I take their advice as paramount? Hell no. All opinions are of equal value unless it’s someone in an actual position of authority and you have to appease their whims (but even that’s not always the right thing to do). Need proof? I was guided towards this idea via a letter I happened to stumble across on Imgur a couple days ago. 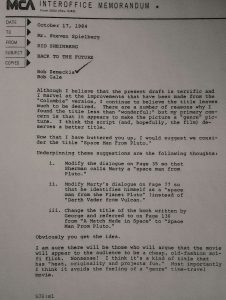 Look at that beautiful train wreck. This is what was sent as a memo on the upcoming production of Back to the Future, or, as Sid here would have called it, “Space Man from Pluto”. Yes, Sid was really hung up on that Pluto thing, probably because at the time it was still considered a planet and Sid knew, he just knew, that if he didn’t make a movie about it some astronomer would roll up and take that title away. Alas, Sid never got his way and the rest was history. Pluto lost its status as a planet, Neil deGrasse Tyson instantly became both the hero and villain of space nerds everywhere, and Back to the Future went on to be a wildly successful movie franchise.

Would Sid’s input have ruined the movie? No. But it really demonstrates just how flawed advice can come from just about anywhere. This is a guy in a film industry sending a memo to Stephen fuckin’ Spielberg, and he’s giving bad advice in the process. Think about how many years of experience he had to have under his belt to give input on a movie like this and it’s just… awful advice. Just completely awful. And his motivations for this advice don’t even make sense when you look at the advice itself. Oh, you don’t want it to be like a genre movie? Well then I’m sure your formula of The {Blank] From {Blank} is exactly the direction to go!

And it’s not like Sid was some hack who never did anything right. Sid Sheinberg, infamous among people now for his bizarre fascination with Pluto, was also the COO of Universal Pictures as it released films like Jaws, E.T. and Jurassic Park. Hell, remember Schindler’s List? Despite the fact wikipedia says the movie succeeded in spite of him, Sid was the guy who bought the movie rights for it. He was even the guy who went and hired some young no-name director named Stephen Spielberg too. Shit, consider that, this wasn’t just some guy in the studio who happened to know Spielberg – this was Spielberg’s mentor. And you know what Sid said was most important about being a mentor? Trusting that the people you’re mentoring can be right too.

So trust your feedback, but don’t lose yourself to it. What you’re being told by these people is coming from a good place but is also being handed to you by someone just as capable of being wrong as you. If Spielberg’s mentor can be wrong, so can yours. In fact, as an autodidact, my mentor is me and I’m convinced that guy has no clue what the fuck he’s doing most of the time. I do have a circle of friends I trust to be honest with me, but they’re still human, still flawed, and still capable of giving bad advice like Sid. Because the deeper you look into the world of creative industries, the more you realize stories like Sid’s are actually the less absurd instances. Sid at least knew to trust his proteges and employees to make the right choices, but some…

Forget to recognize their own imperfections.

(I write novels. I get interesting feedback and I respect it greatly, but sometimes it’s wrong. When that happens, I may complain on twitter.)