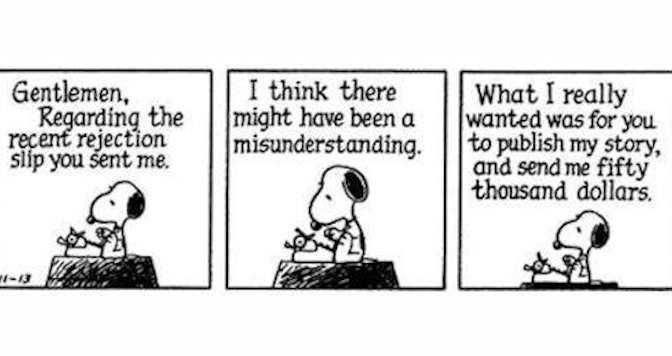 One of the interesting aspects of being a writer online is that you get to see a lot of other writers from all walks of life and philosophies. There are a lot of successful writers that everyone follows, of course, but beneath the big names you have a wide variety of people who have seen every level of success and have taken just as many roads to get there. And these people network a lot: having conversations and following each other on social media all the time. So one of the things you can really see if you follow enough people is how the writer community divides across certain lines. One of the lines I’ve noticed is pretty clear between three big schools of thought is just how likely your work is ever going to succeed.

The first school of thought you’ll find without much effort is the group that wants to cheer each other on. Being in a creative industry isn’t easy and a lot of people get discouraged, so there are people who will constantly be doing what they can to let you know you’re not alone. The second group, not pessimistic, will focus more on the grind of it all. These people will tell you can make it, but it’s uphill battle, it’s going to be exhausting, and you’re going to need a plan. Meanwhile, the third group is the one that says it’s basically pointless to try unless you get damn lucky or you’re supremely talented. And, of course, the people in the third group tend to think they’re among the chosen – even if the numbers don’t bear it out yet.

The third group is just a fact of life. I have a friend of mine who does script coverage who has had to deal with quite a few of them already in her young career. But one of the things I’ve noticed trending among several of these people lately is the idea that self-published authors were just too immature to follow the traditional publishing route. In their eyes, clearly, if your work was worthwhile then you would have gone to the publishers instead of trying to do it on your own. Either you weren’t confident enough in the work, were too arrogant to accept edits, or just weren’t patient enough to let the system do its work. According to this meme floating around, traditionally published works are better than self-published works by default. And at first I was just going to brush it off as their standard MO and not comment on it, but then a thought occurred to me:

Shitty books get published the traditional way all the time… 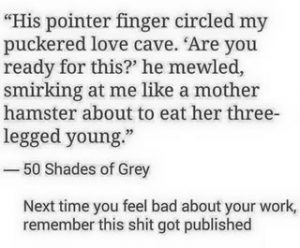 It’s easy for people to look at the numbers of novels released through self-publishing and immediately compare them to the old school vanity press. And, I’ll admit, some people really do use it that way. But the notion that everyone who chooses to self-publish is just trying to somehow cut corners and wasn’t ready for the “real” publishers is not only dismissive but working off of shallow observations. Yes, it’s easy to find hundreds of self-published authors advertising on social media because that’s where the self-published authors have to go. But anyone who thinks every book published the traditional way is somehow golden either hasn’t paid a lot of attention or is kidding themselves.

Traditional publishers do get better results on average, but that’s not entirely about the quality of the work. Publishers do have more quality control filters and do knock several out of the running early on, but that’s not to say that only “good” books get published. Stephen King has told people many times in the past that one of the benefits of reading as much as possible is to see how many shitty books actually get to print. And if you look around enough, you’ll realize he’s 100% on the nose. The market is full of sub-par books that were published because someone figured there would be a market for them even if they weren’t exactly the best material. The thing is, you generally don’t hear about these books because they create niche markets and then don’t become mainstream. They fill their roles, they find their specific audiences, and then they tend to go away. So the big difference between the self-published and traditionally published markets is what happens when a bad book is declared the “next big thing”, because traditional publishers can totally make a success out of a shitty book. 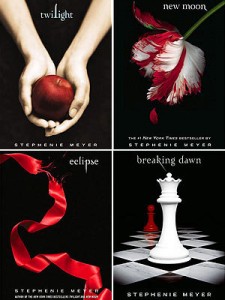 In most cases I avoid punching down here (hard as it is for me to find a “down”), but thankfully the publishing industry has made a couple examples multi-million dollar bestsellers when almost everyone knows they shouldn’t have been. The first to come to mind for me, almost by default, is of course the Twilight series of books – started with a novel that reportedly had been written, edited, and submitted within only 6 months of the author having a sexy dream about vampires. I know people who’ve spent more time on their first draft, and if you sit down to read through the books with a critical eye you’ll see that shine through. It is full of tortured language and painful plot devices that make it unpleasant for most people to read. And yet, because someone saw a market for it, the publishing industry made it happen.  In fact, speaking of painful, they technically made a successful franchise out of the thing twice. 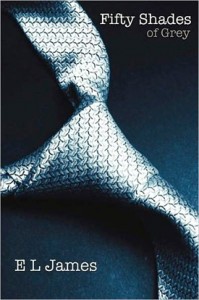 Some could argue that Fifty Shades, starting as a literal Twilight fan-fiction that EL James originally self-published, is actually a worse product than the work that inspired it. Frankly, those people would have an easy argument to make. The writing is somewhat stiffer, the plot makes even less sense, and the characters somehow became more hollow. Sure, Bella was weak willed and Edward was a stalker, but when Edward caught up to her he wasn’t going to start wailing on her. Even the S&M community thinks Fifty Shades is too painful to read, and those people like pain. But still, because the publishing industry wanted to make it happen, they totally made it happen – buying up the rights to Fifty Shades and dumping the same fuel onto the fire they used to make Twilight a hit. They made these bestsellers, both of them breaking records, and sold the movie rights to churn out terrible films based on terrible books. And those films? They did fantastic anyway!

So to say that getting published is somehow a mark of your quality and not just a mark of your perceived marketability is a little disingenuous. Yes, a publisher will turn down real train-wrecks more frequently, but unless you’re going to argue to me that Fifty Shades was really a work of genius you can’t tell me that publishers universally put out better work. They’re just better at making sure the material they have gets in front of the audience they need. That’s a damn good ability to have, but it’s also a limited resource and only a select few are ever going to get hit with that particular lightning bolt. For the rest of us? You end up doing a lot of your own marketing regardless of the direction you go. There are definitely pros and cons, but the assumption that everyone who ever self-published didn’t weigh those pros and cons is unfair and flat out wrong.

But, I’ll concede this, self-published authors really do need to have ample amounts of patience. In fact, I’ll go so far as to say that a self-published author requires more patience than a traditional author. You have to be willing to grind away at something without knowing for a fact that you’re on the right track. You have to avoid making rash decisions where the experienced hand of a publisher could have reeled you in. You’ll have to put up with the slow climb that smaller works have to do while watching other works take off. And, most importantly, you’ll have to ensure that you’re just as professional with a fraction of the resources.

This is something that I’ve had to learn myself, especially after mistakes I made early on and mistakes I’m going to do my best to avoid making again in the future. You need to be more thorough and careful as a self-published author because you can’t just power through a couple missteps with a good marketing campaign. The average independent doesn’t have the resources necessary to hit Twilight numbers despite a Twilight manuscript. Now, that’s not to say that there aren’t some very successful self-published authors who have put out Twilight level work, but those people found their niche, hit their stride, and managed to pull off a small miracle. They’re to be admired, despite what they’ve put out, and I will always tip my hat to people who’ve put out niche work and made it work for them.

Being self-published isn’t an easy road, it’s covered in obstacles and learning experiences that will take you some time to adjust to. The fact is, some people who enter it aren’t actually ready for what they’ve gotten themselves into. I know I wasn’t and I’m planning to put what I’ve learned to good use in the future. I’ll even admit that it’s entirely possible I wasn’t ready for the professional market when I started. But shaming people who’ve self-published by claiming they just didn’t have a chance at the traditional market is ignoring that the traditional market isn’t infallible. It’s hard making your way through the industry as a writer of any sort and mistakes can be made regardless of what direction you went in. And that assumption that the quality controls of the publishing industry just automatically get better results…

Isn’t even something the most successful published authors believe in.

(I write novels, dabble in screenplays, and make silly tweets. They’re flawed but they’ll get better. After all, there’s always second editions, second drafts, and the delete command.)