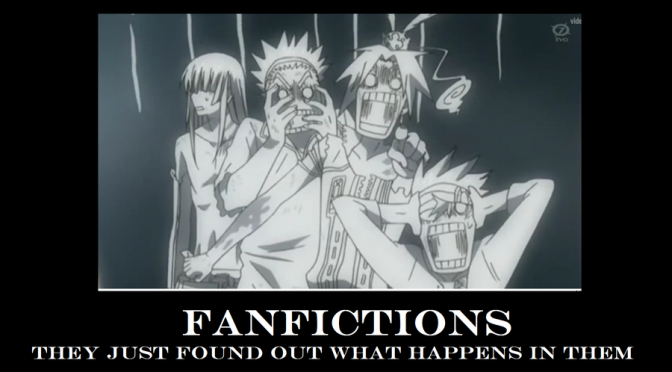 Last week I came to the defense of fan-fiction and the people who write it. As I said then, many of us have written it in the past, including many professionals, but the entire thing has been stigmatized to the point that every former fan-fiction writer I’ve known talks about it with shades of shame and a dose of self-deprecation. I have yet to speak to someone talk about their old fan-fiction and then tell me something they did right.

Think about that. It’s common enough to hate your old work, but everyone remembers their first truly original peace (with just as many flaws) with at least one good memory. The fact that we remember the fan-fiction solely for our mistakes shows that we’ve scorned the entire practice to the point that it’s like admitting that you touch yourself at inappropriate times.

Though, considering a lot of the sub-genres within fan-fiction, they may related for some.

The point is, I’ve seen fan-fiction act as a gateway drug – a chance for people to enter writing in a safe place and with the pieces already laid out for them. But, as is so incredibly clear, the better practices of writing aren’t something that people start to learn until they exit the fan-fiction stage because…who are they going to ask? Everyone who knows enough to teach them is generally laughing at them. And, frankly, that’s part of that barrier of entry they’re trying to edge around.